Up on a hill in Cala Fornells, just next to Peguera, there is a couple of terracotta coloured houses facing the street. From one side, they look like quite ordinary houses, but if you look behind them you will see a fantastic little residential area, built along the slope down to the sea. 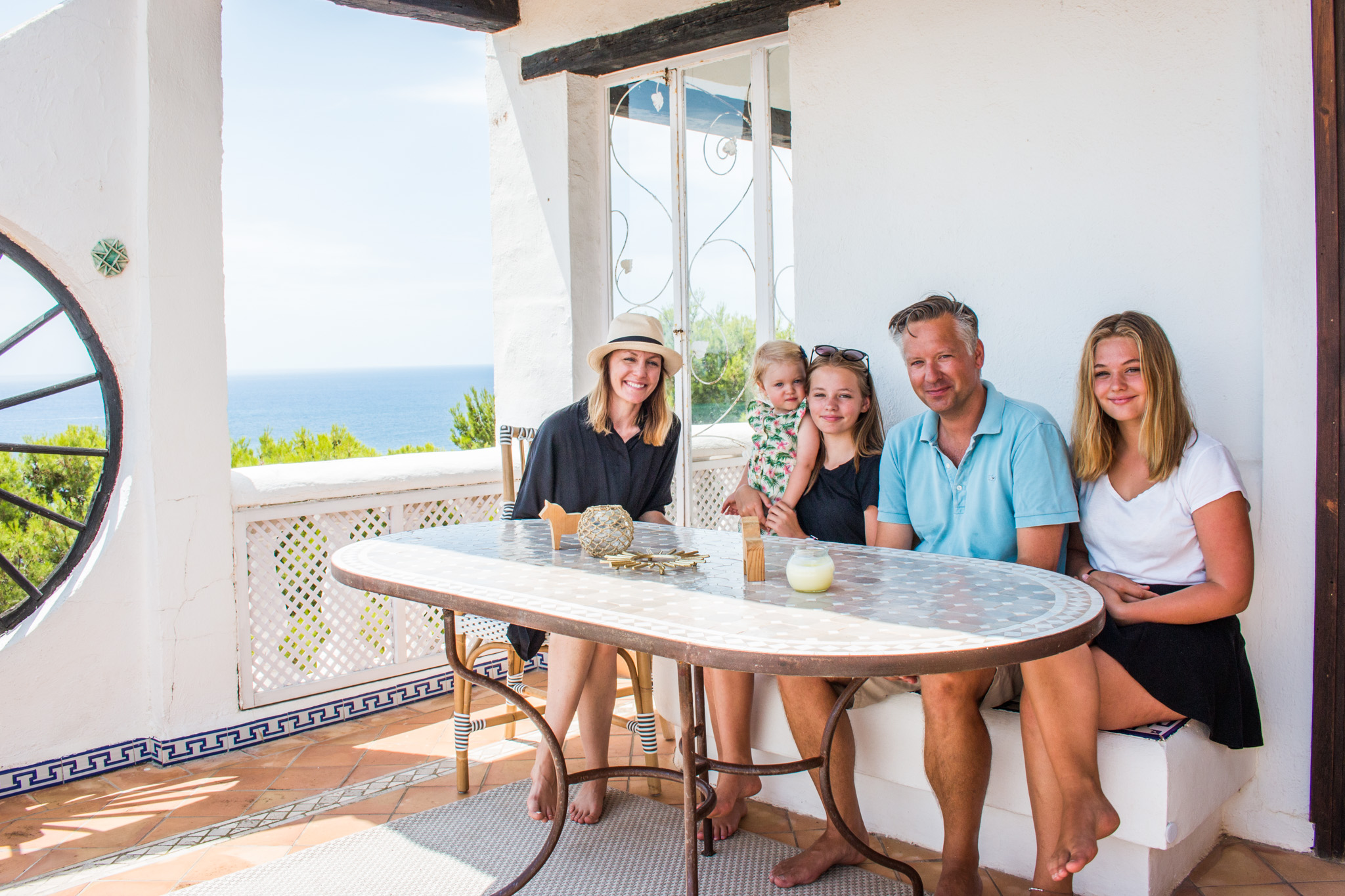 Maria and Claes with (fr. l) Tyra, Lily and Elsa.

In one of the penthouse apartments, Maria Carlsson and Claes Kjellström live with their children Elsa, Lily and Tyra.
The entire area is created by architect Pedro Otzoup, who was inspired by a Mexican “pueblo” when he designed it.
The higher you get, floor by floor, the more beautiful the sea view gets. From Claes and Maria’s apartment the view is breathtaking.
– This was what we fell for, Claes says. The view from up here really is amazing. 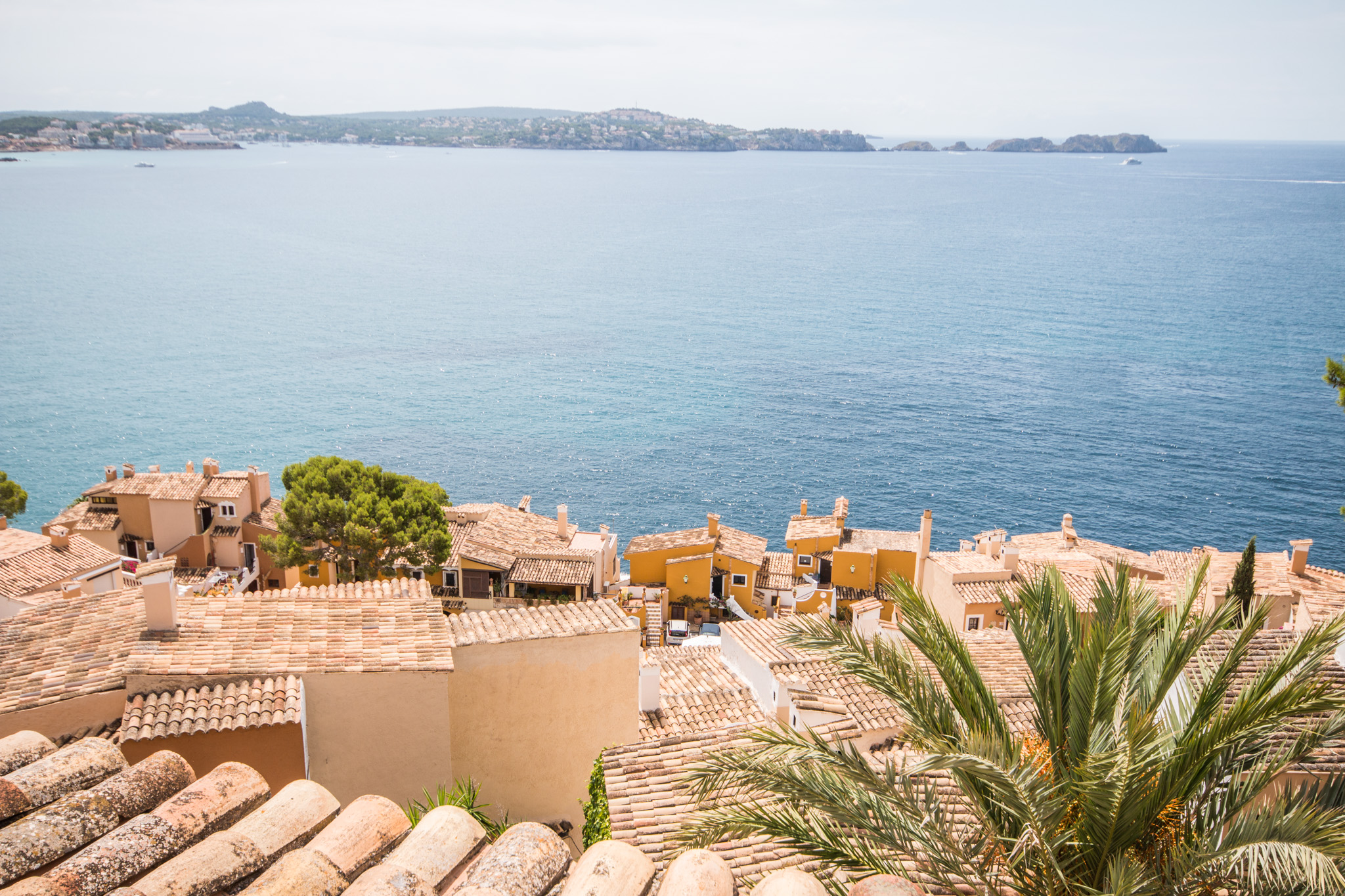 The architect was inspired by a Mexican village when he designed the area. 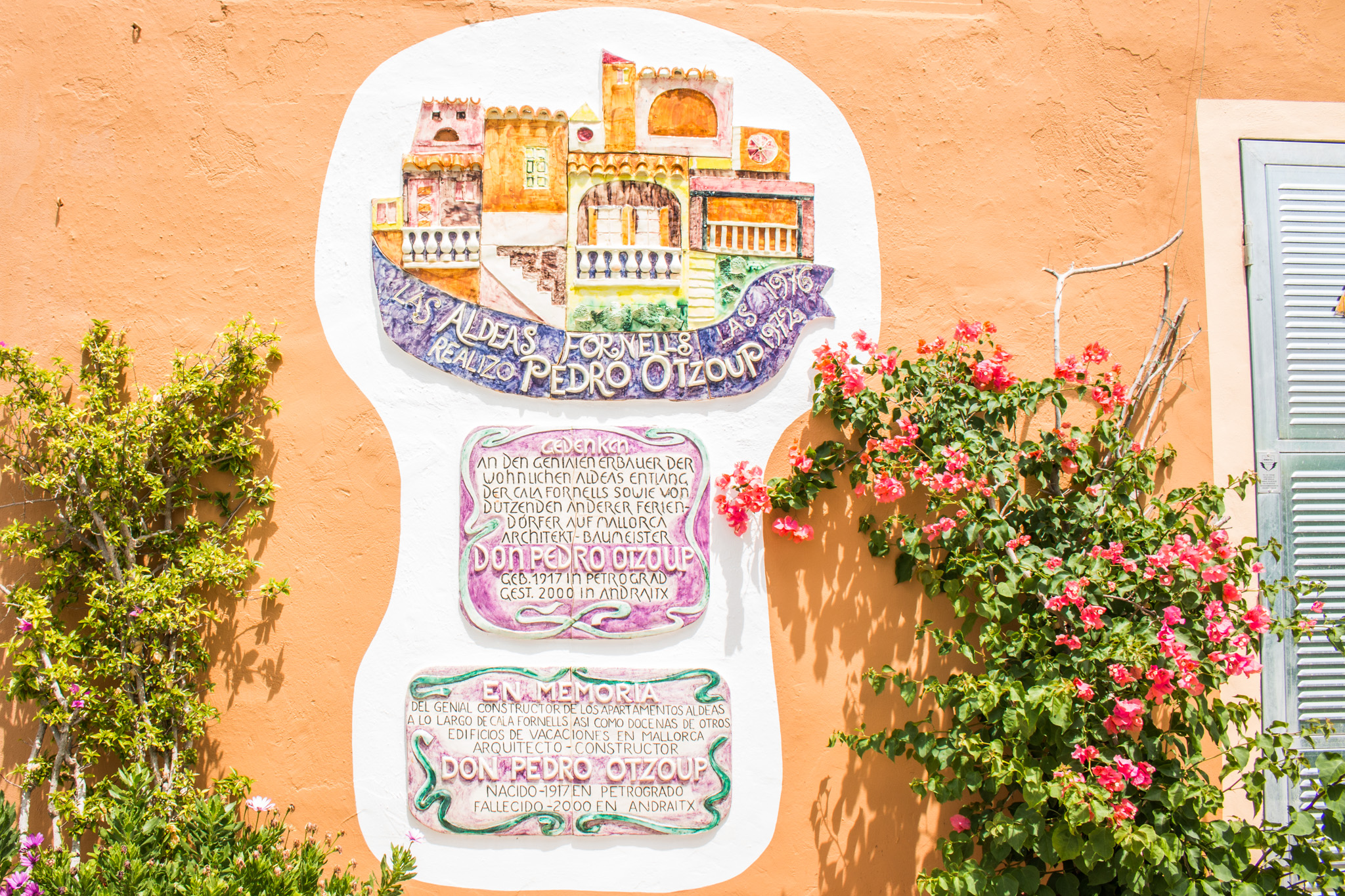 Pedro Otzoup has designed several areas around the island.

The apartment is no larger than 40 square meters, but is well laid out with a spacious kitchen and a large bedroom with a room divider. But it does not really matter that it is small inside, since the roof terrace is almost as big as the entire apartment.
– We probably spend about 80% of the time out here on, Claes says as he steps out to the rooftop.
And it’s not hard to see why. The large terrace is facing three directions with clear views in all of them. To the South the blue, shimmering Mediterranean. To the East, Paguera and the small bay with beaches. And to the North, majestic, green mountains.
– It’s so beautiful when you see the clouds settling over the mountains, Claes says. 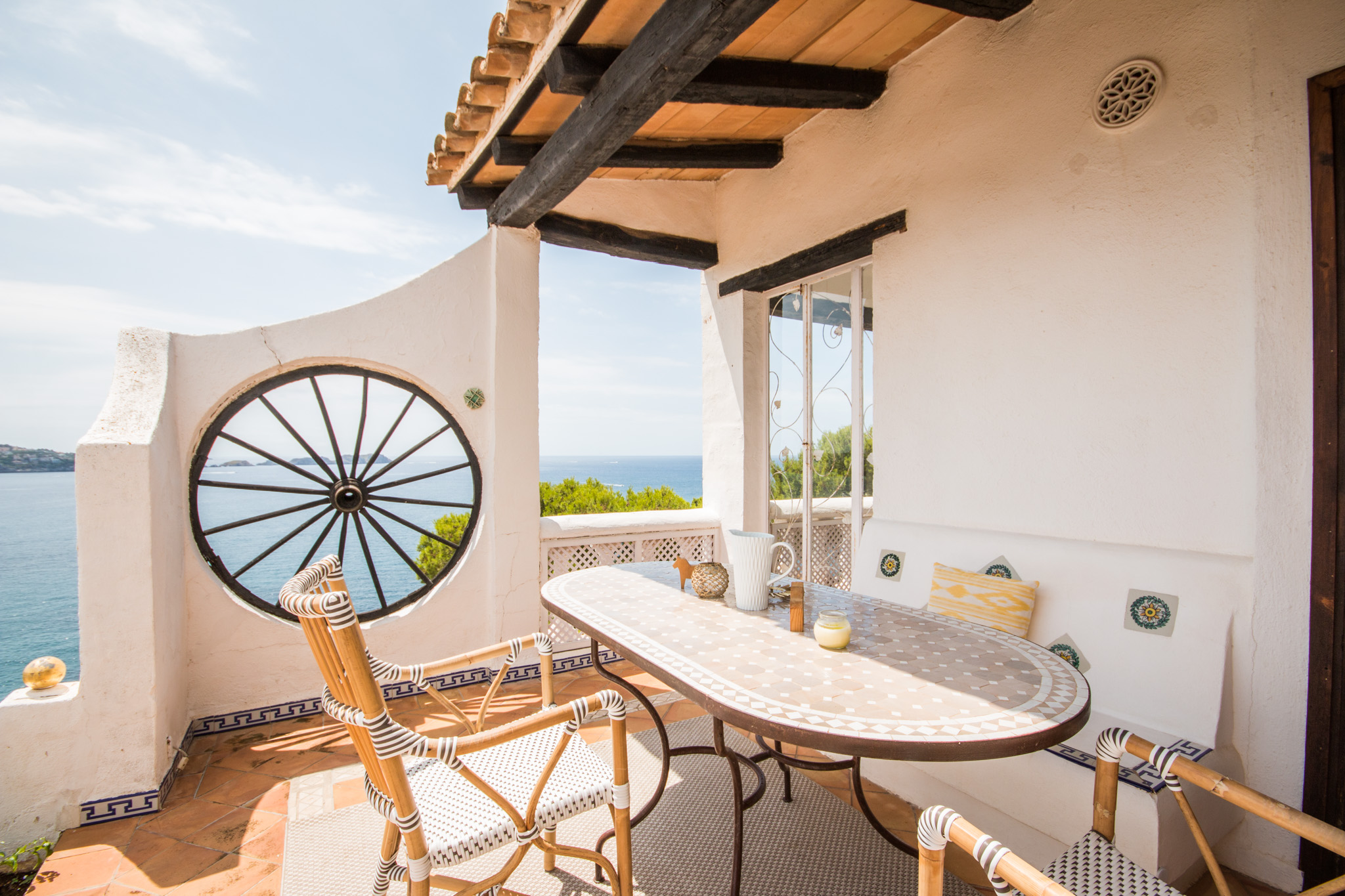 The terrace has got a dining area… 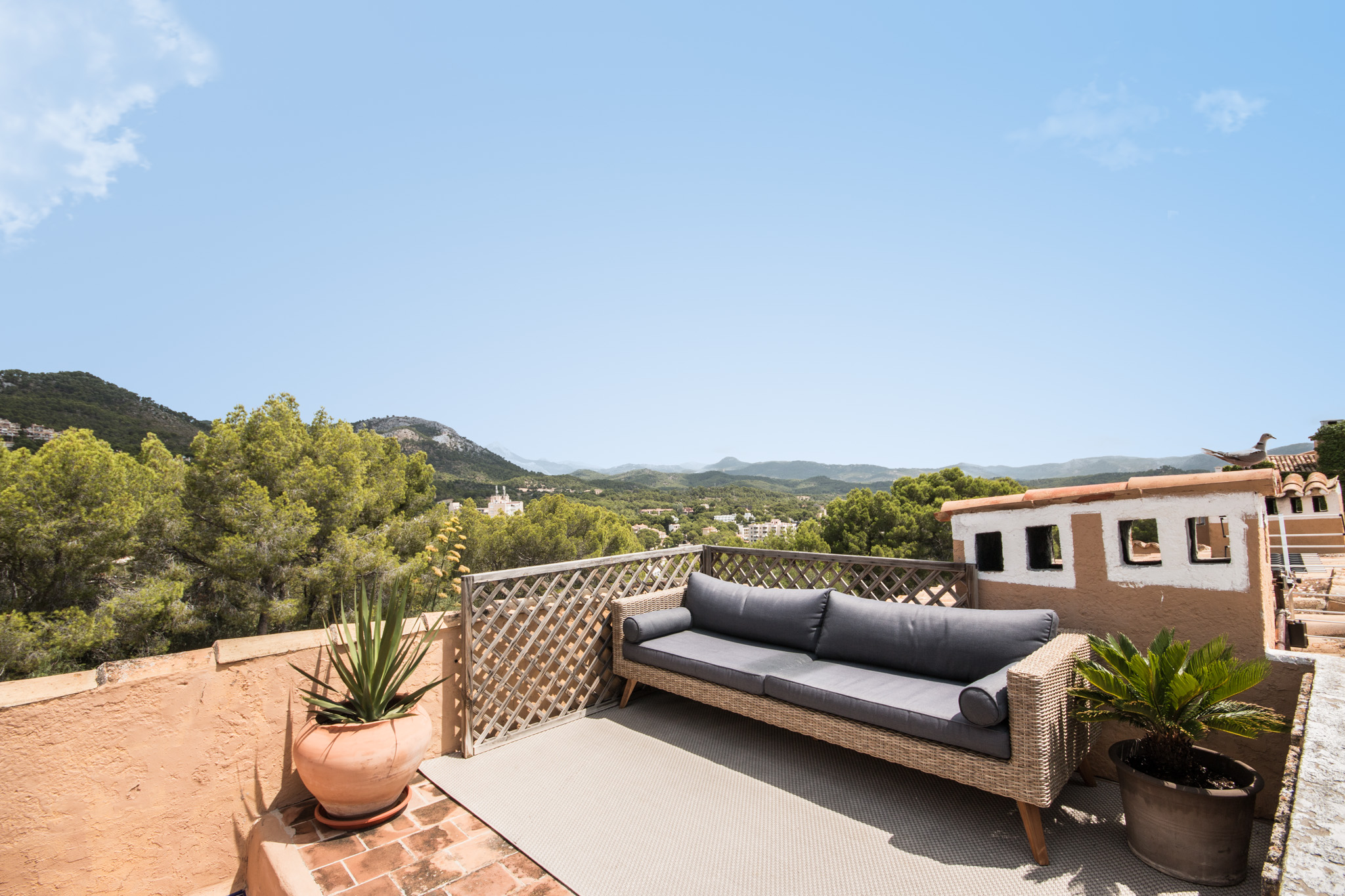 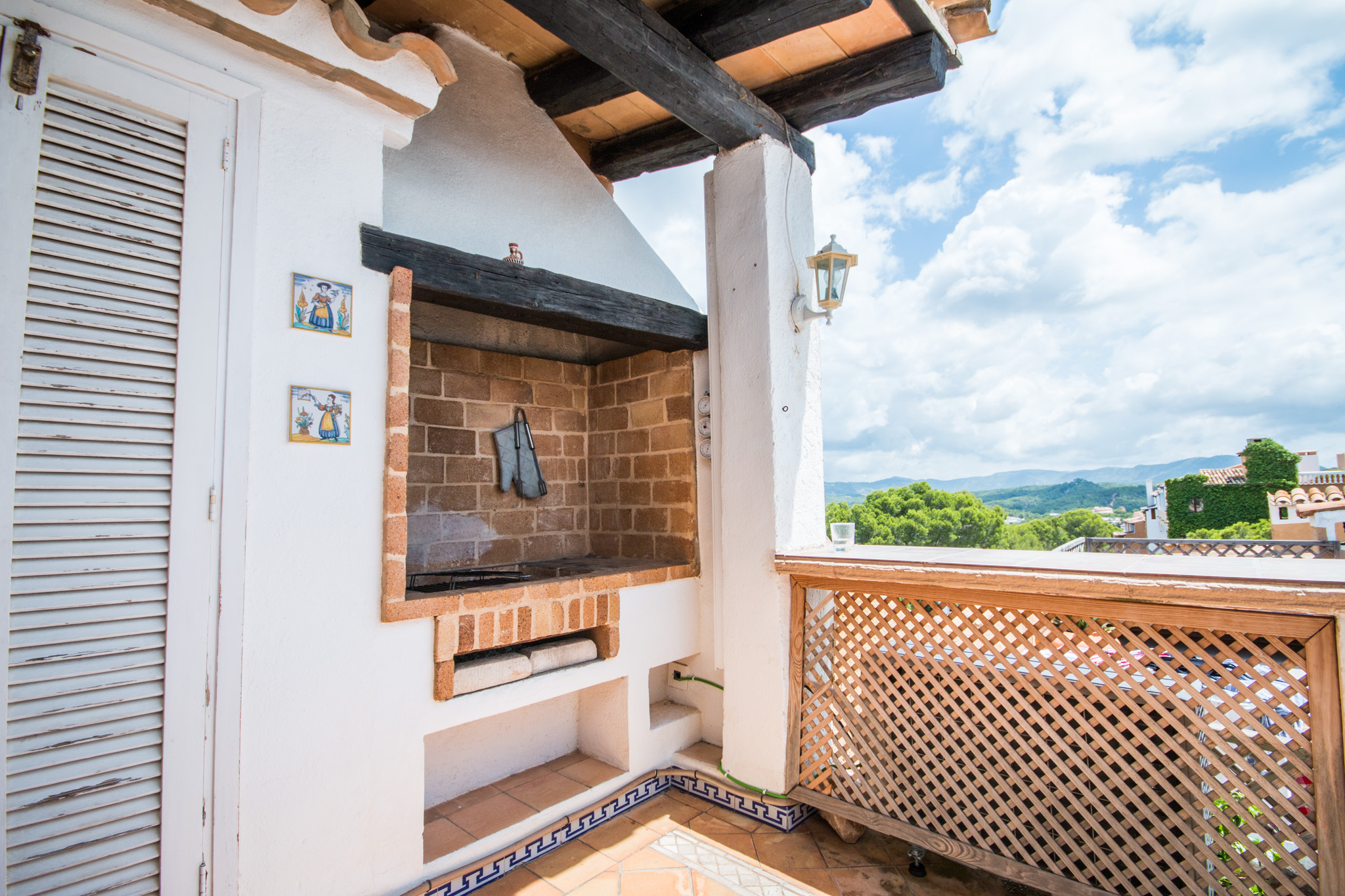 …and an outdoor kitchen.

Together with the girls, Claes and Maria have been in Mallorca on vacation for several weeks.
– I could easily stay here for another couple of weeks, Maria says with a laugh.
The apartment has been theirs since July last year when they made their dream of a holiday home come true.
– In Sweden we live in a house, but we never had a summer house, a cabin or anything like that, but we were starting to think about buying one, Maria says.
The idea was to get a place where they could spend their summer holidays and enjoy some days off, but after a while they asked themselves if it really had to be in Sweden.
– I mean, in Sweden, even during the summer the weather is not always great, Maria says with a smile. But here, you know for sure that the sun is shining.
So instead they started thinking about different countries and places in Europe. Since Maria speaks Spanish, Spain was high on the list and during a visit to Mallorca they felt immediately they had come to the right place.
– We felt straight away how incredibly beautiful this place is, Claes says. 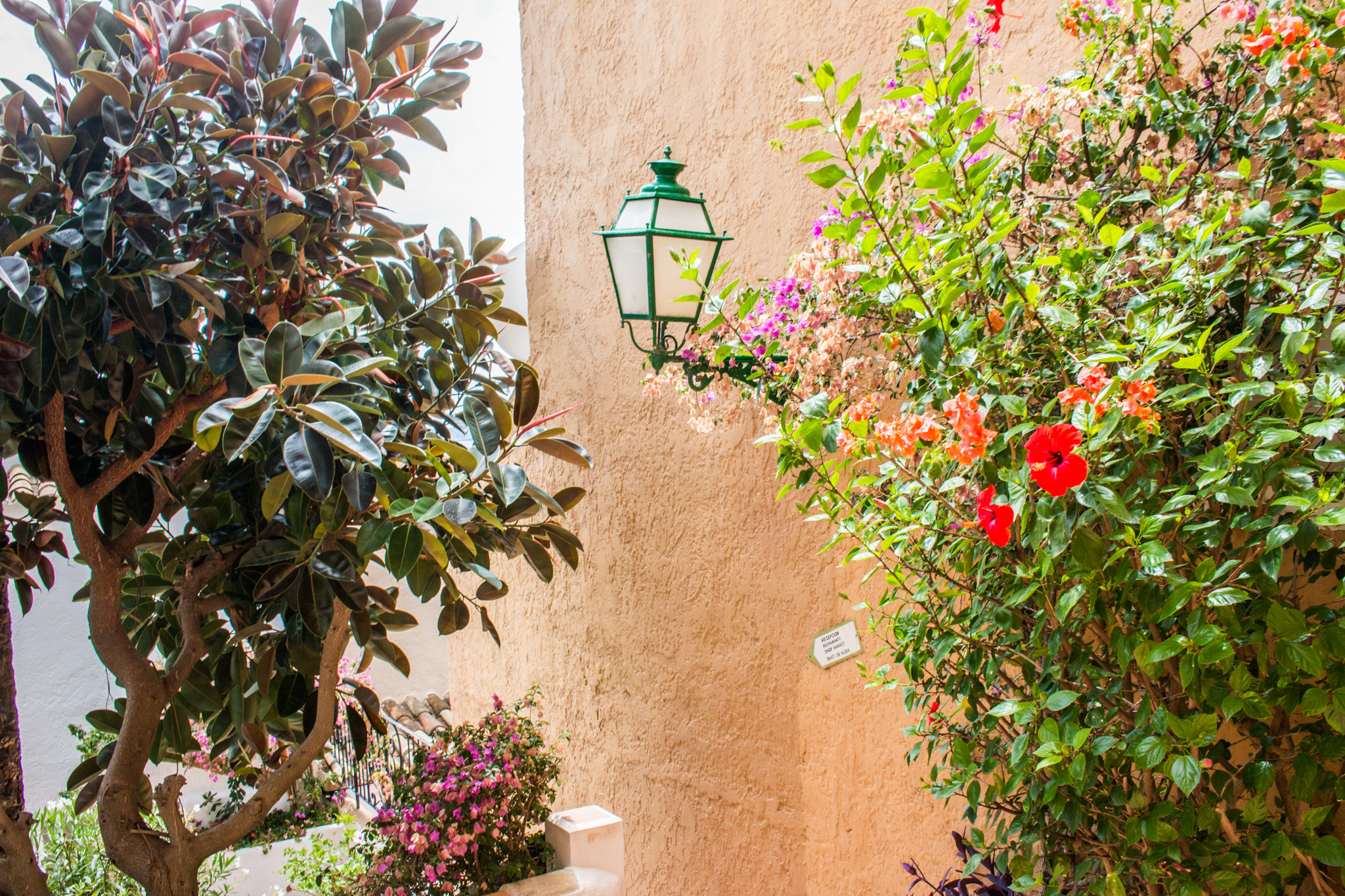 Claes and Maria fell for beautiful Mallorca straight away. 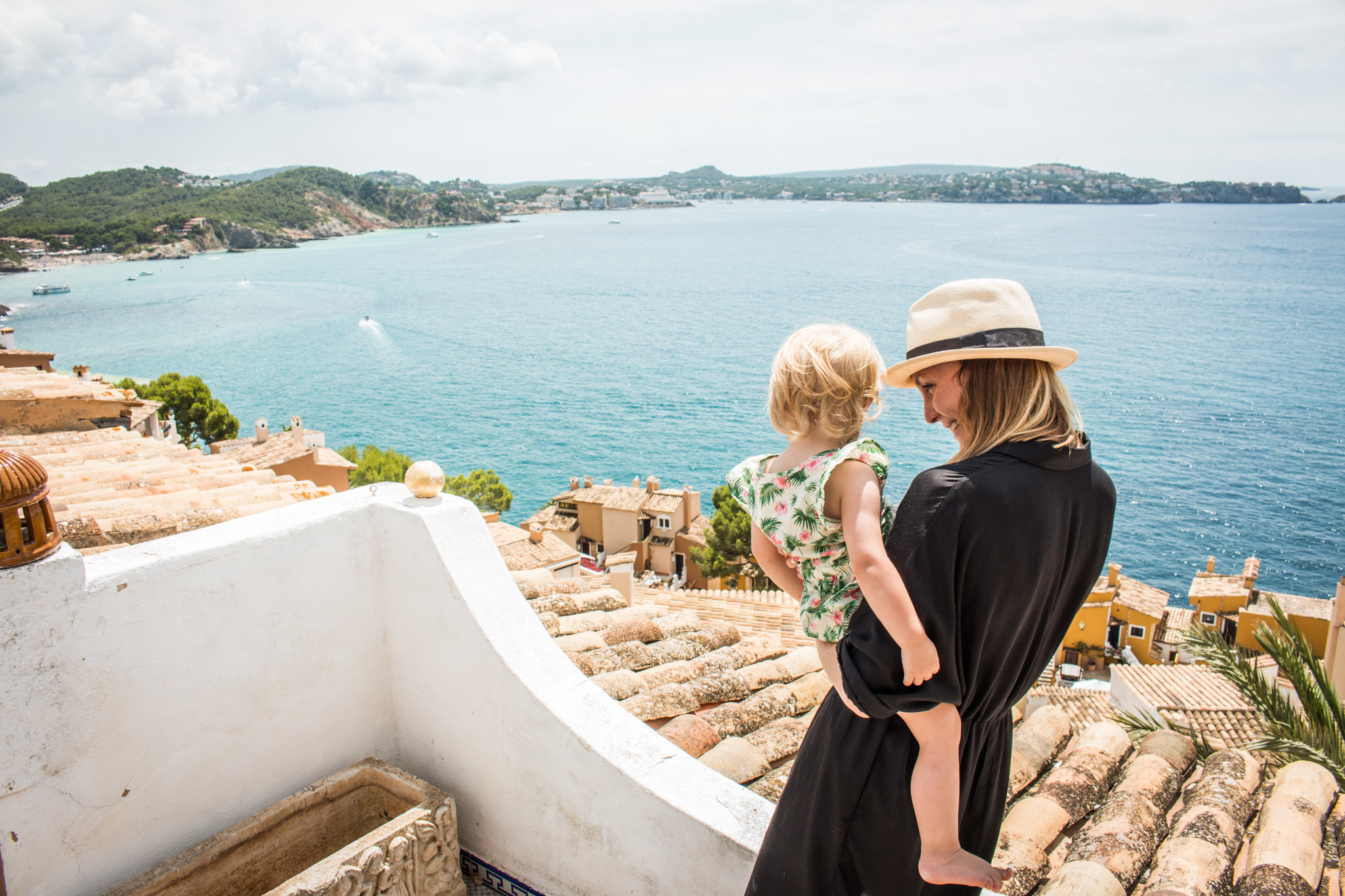 Even young Tyra appreciates the view and watching all the boats.

During a vacation last year, they began their search for a holiday home in Mallorca.
– The plan was more or less just to have a look, Maria says. It was like going on excursions to drive around, visiting different areas and view apartments.
They went to Santa Ponsa, Sant Elm and along the Southwestern coast, but when they arrived to the apartment in Cala Fornells and stepped out onto the terrace, they were swept off their feet.
– As soon as we came out here and saw the terrace, we fell head over heels, Claes says.
Maria nods in agreement.
– Although it was not really what we were looking for, we both felt that we would regret it if we did not buy it, she says. We did think it was a little too small for a whole family, but we got such an incredible feeling.
It was love at first sight and Claes and Maria made an offer on the spot. 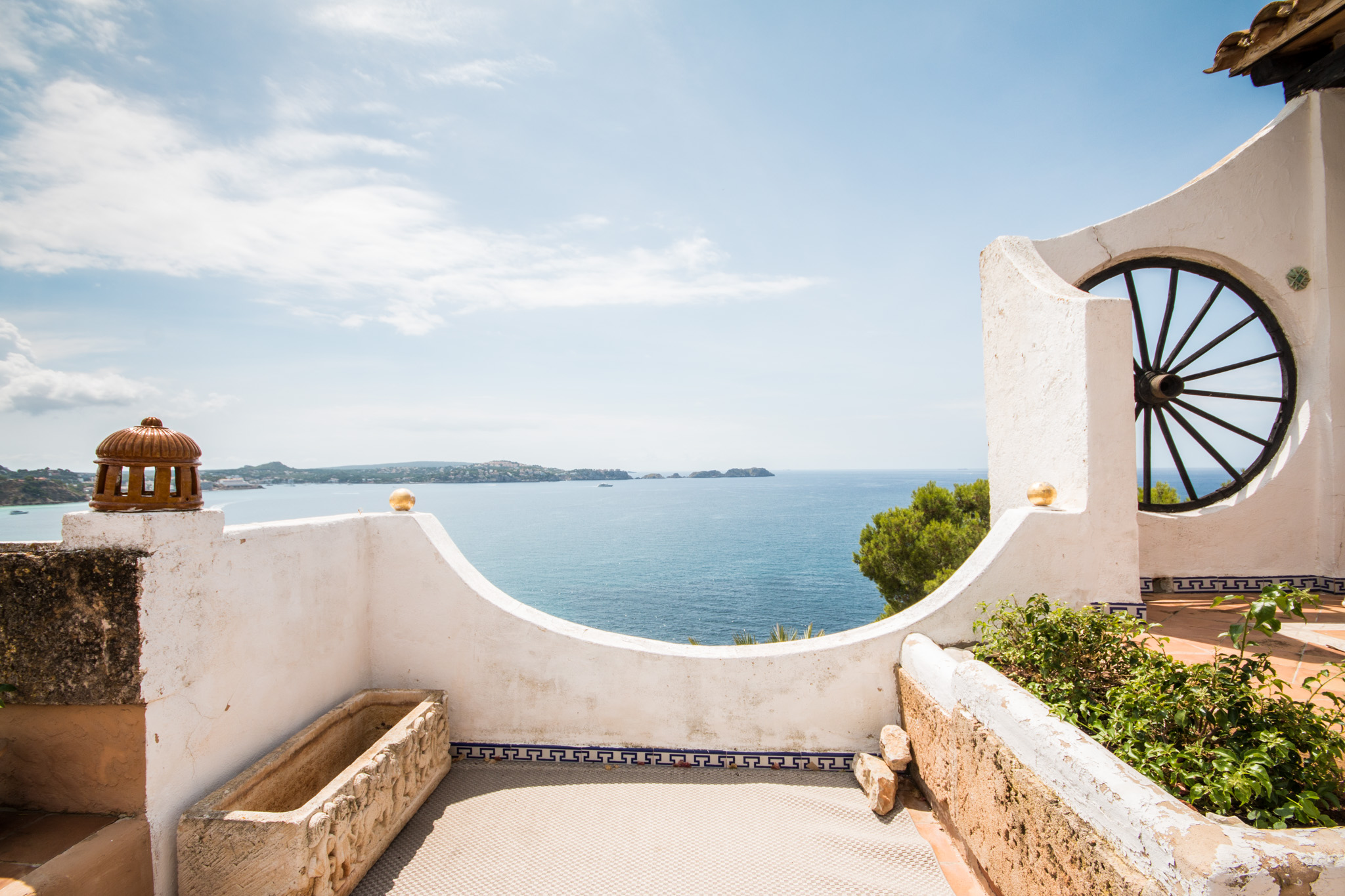 The feeling they got from the amazing roof terrace, made it impossible to resist. 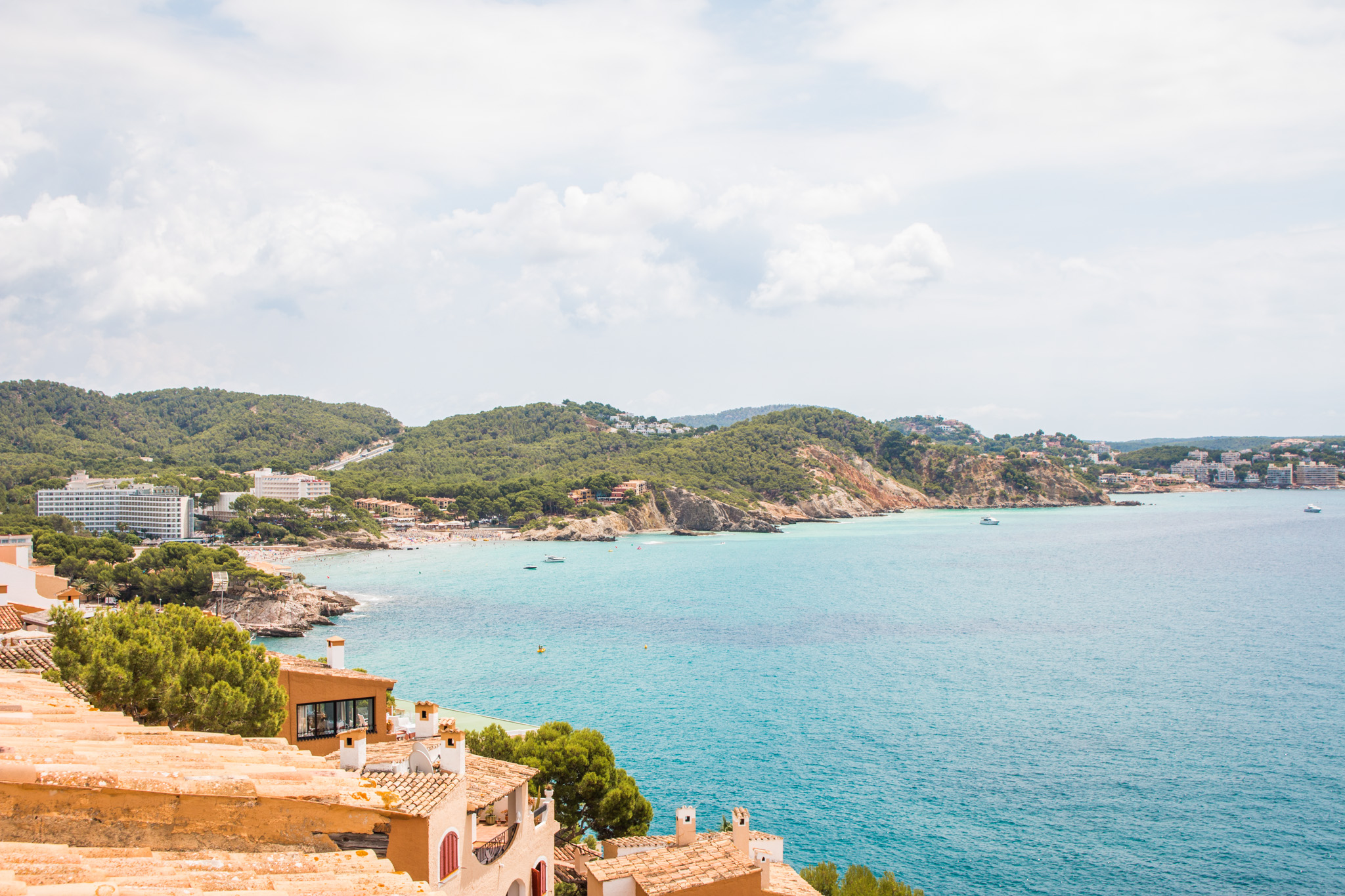 Peguera is only a stone throw away.

And if the offer was quick, the deal was sealed even quicker. The apartment had been used for holiday rentals and was not being used at the moment which meant the owner could give them almost immediate access.
– Everything went incredibly fast, Maria says. When we were told that we could get access to the apartment within just one week, we extended our holiday and started preparing to move in.
Instead of relaxing days on the beach and exciting excursions, their vacation transformed into planning an upcoming move and dealing with the logistics.
– It turned into a holiday with lawyers, meetings with the bank and day trips to Ikea, Maria says with a laugh. Not in our wildest dreams did we think it would go that fast.
After two weeks in a hotel, the family could move into their new Mallorca home.
– It was such an amazing feeling. 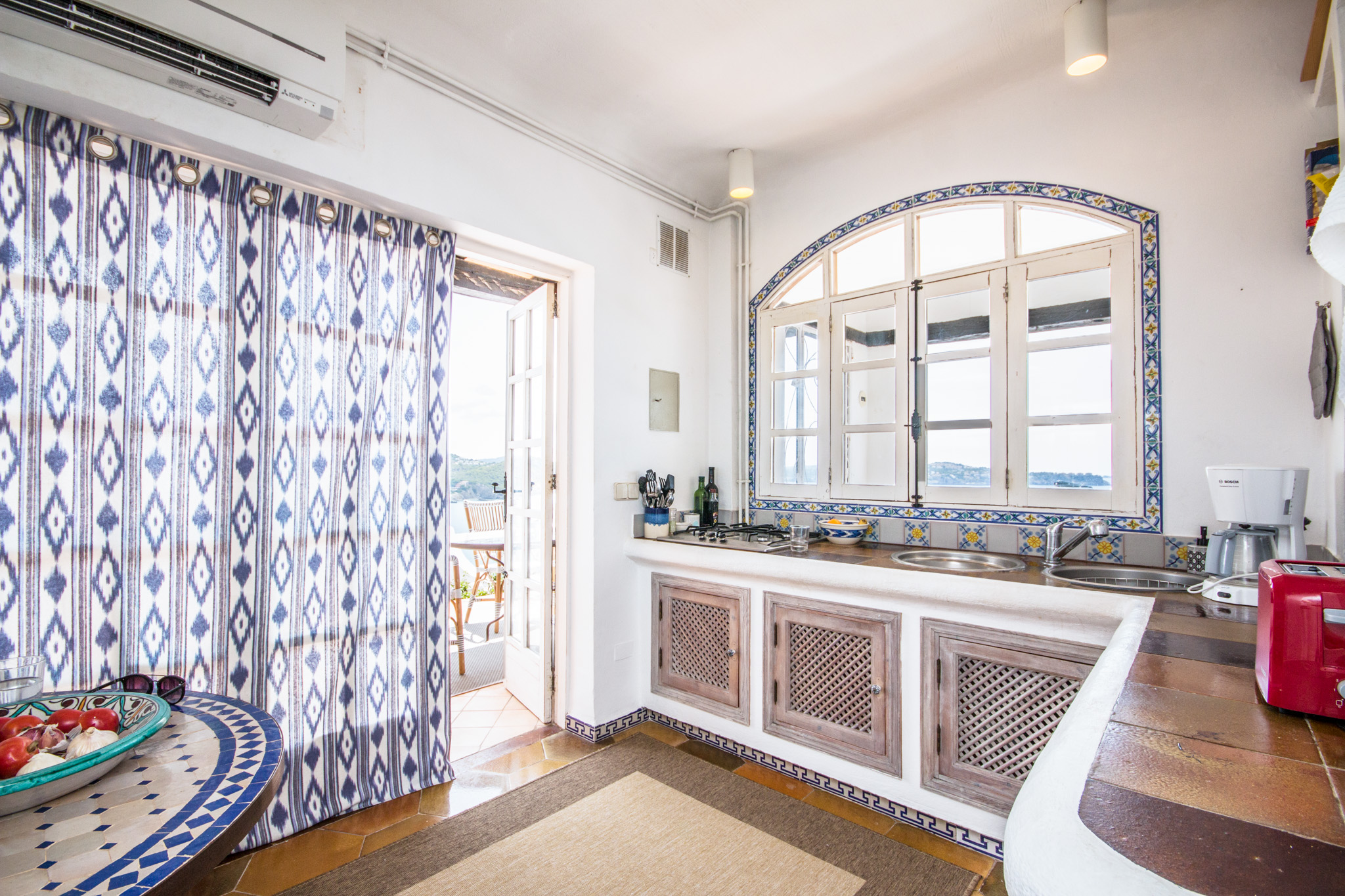 The kitchen has an old fashion style, beautifully preserved and decorated with mosaics and Ikat fabrics from Mallorca. 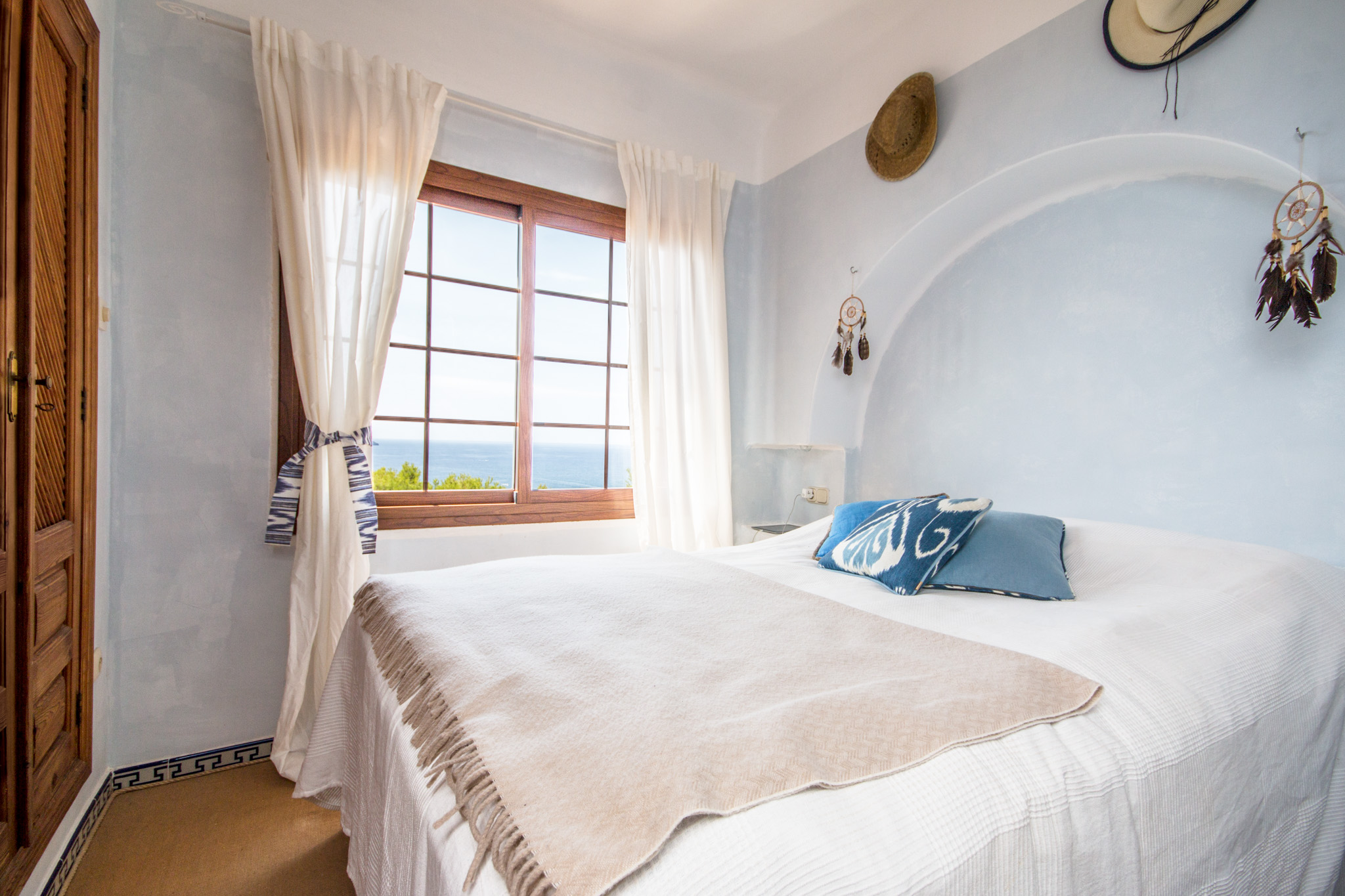 The sea view is magnificent from the bedroom as well. 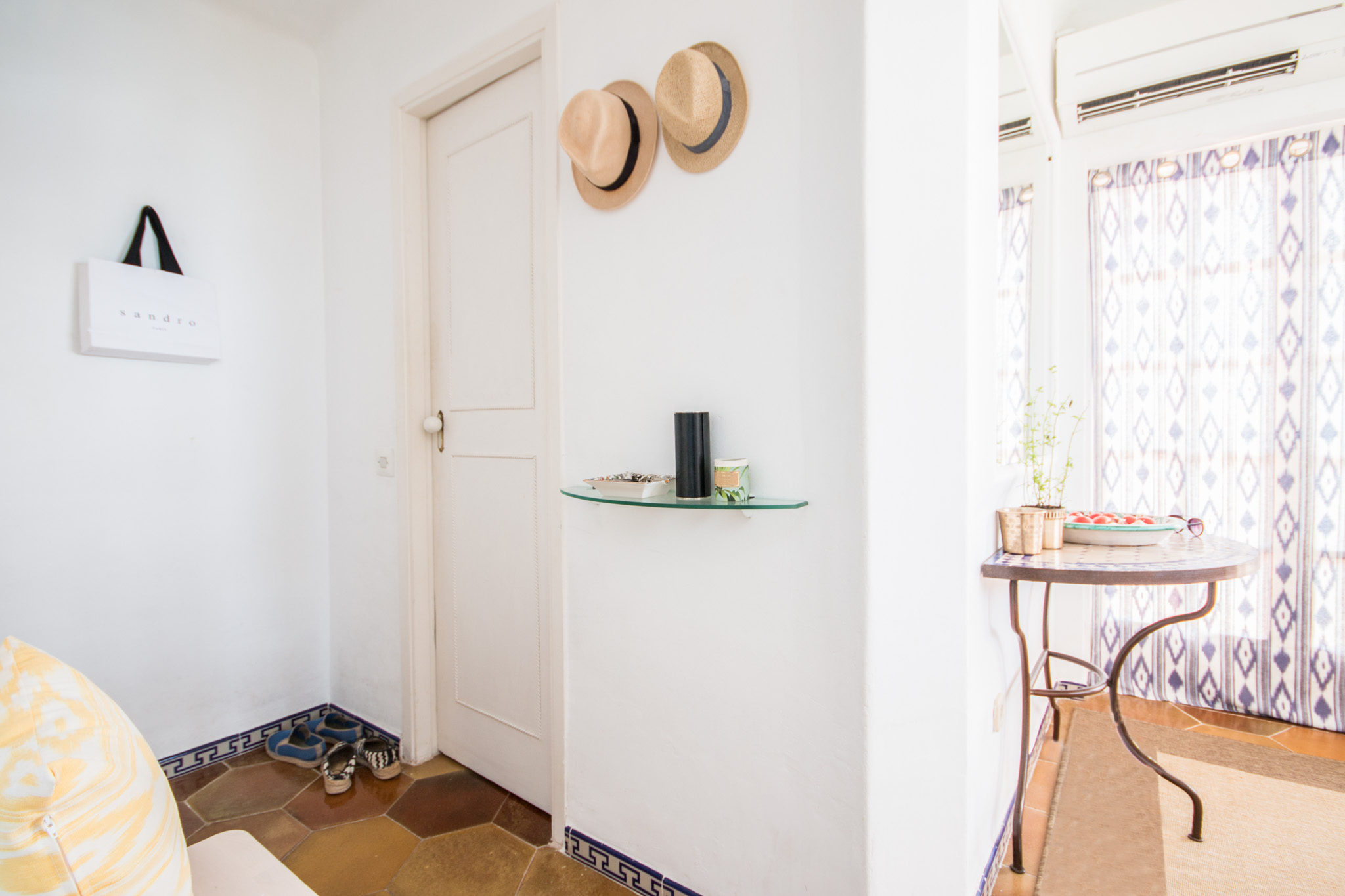 Even though the apartment is small, it really is light and airy.

Thanks to the large roof terrace there is plenty of room, at least during the days, it is in the evenings when it becomes a little tricky.
– We have to improvise a bit with the sleeping solutions, it can get a little crowded, Maria says and smiles.
– Actually, I’ve been sleeping out here on the terrace a few times, it’s really nice, Claes says. There is a nice, cool breeze up here at night.
But during the daytime they are almost never in the apartment all together at once. Normally they spend their days exploring the island. The market in Consell or the village Banyalbufar are favourites, but they also visit Palma quite often.
For the kids, visiting different beaches is the best way to spend a day. Especially Gran Folies or Es Trenc. And for those days when they are not discovering new calas and beaches, there is both a swimming pool and private rocks in the area.
– But it is a bit of a walk to get down there. We counted 315 steps, Claes says.
Despite that, they go for a morning swim almost every day.
– It is perfect. First you get some exercise and then you can cool off with a swim, he says with a laugh. 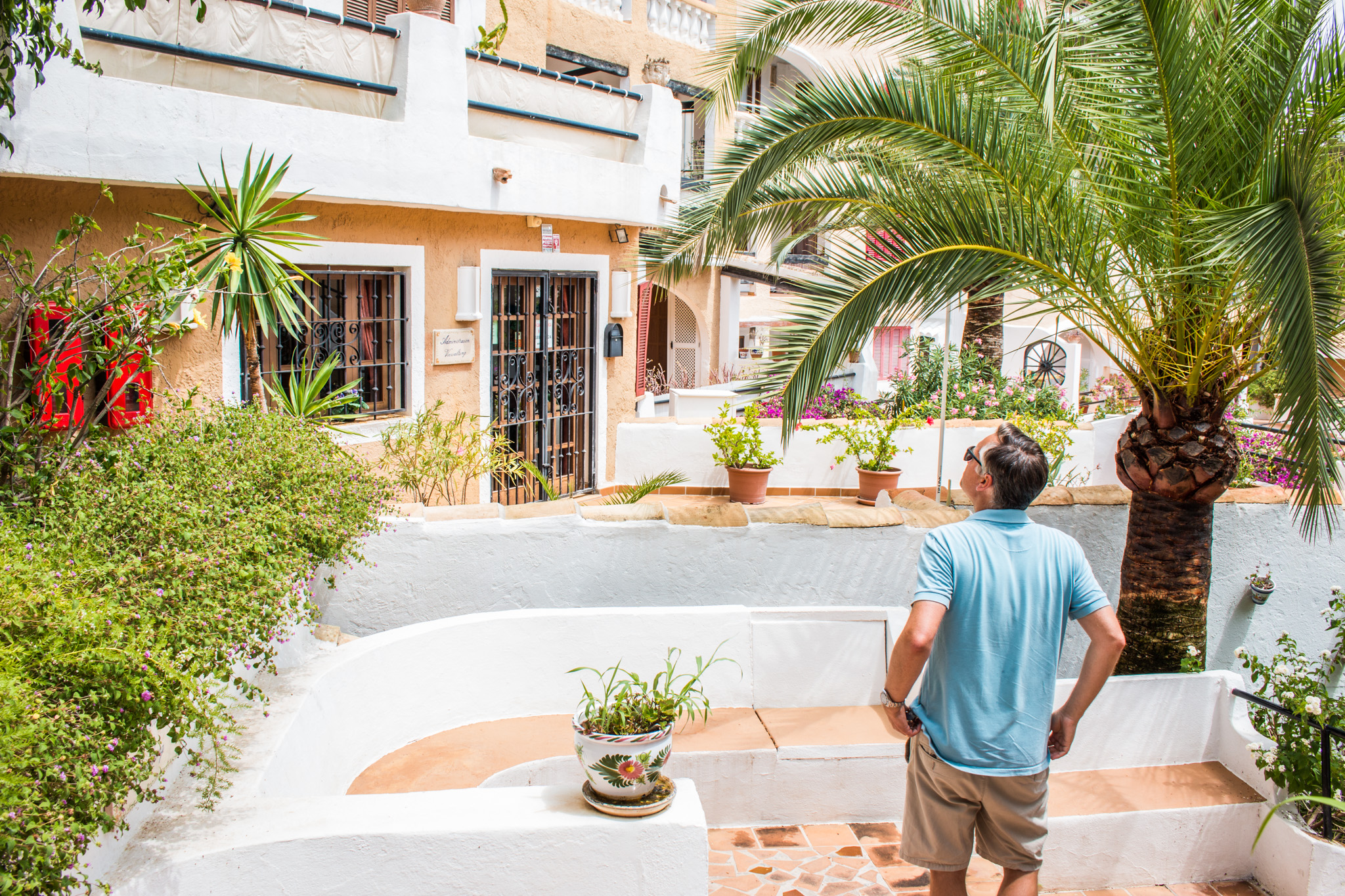 A walk through the “pueblo” takes you down to the water. 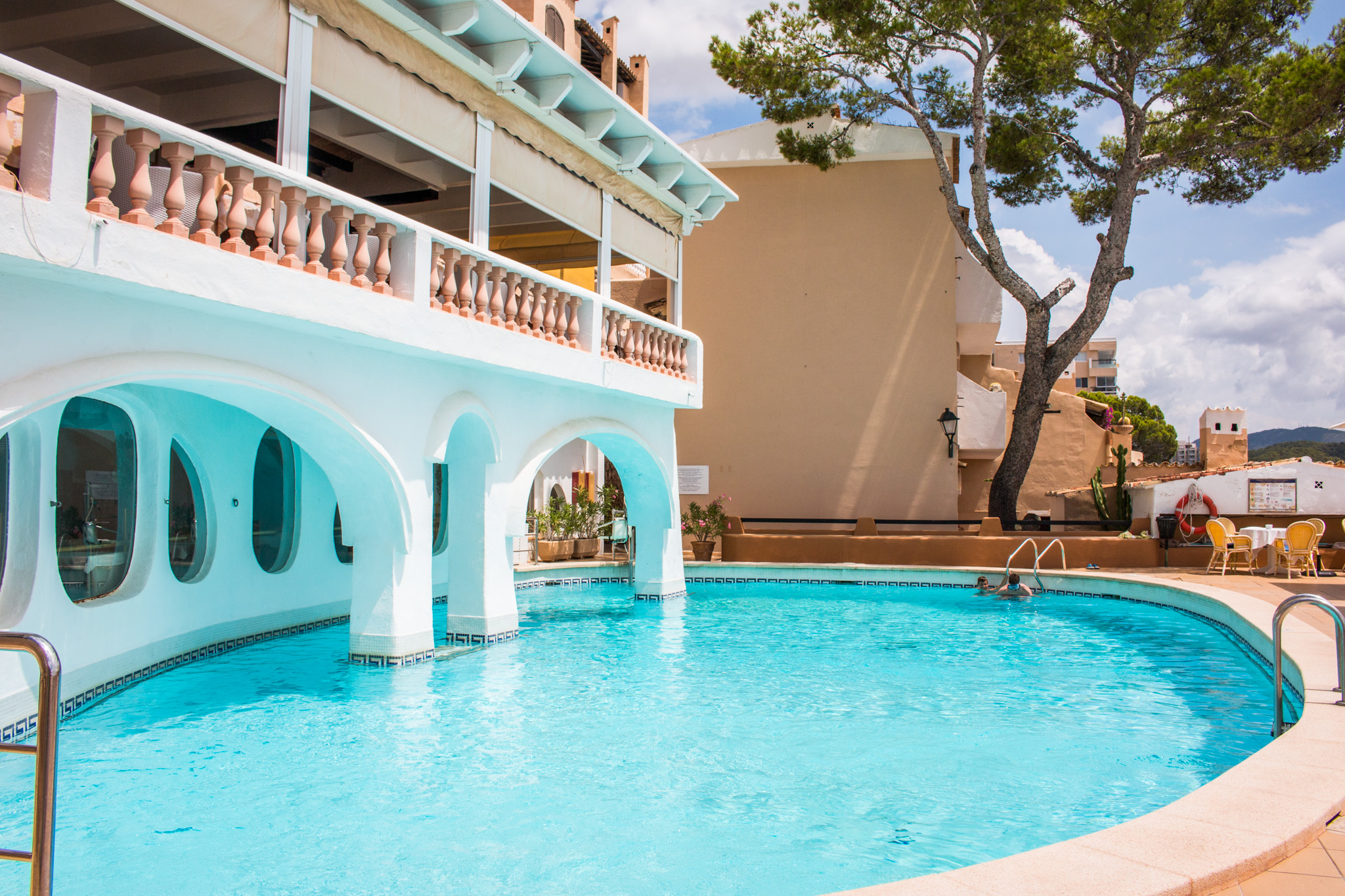 On the way there you pass the swimming pool. 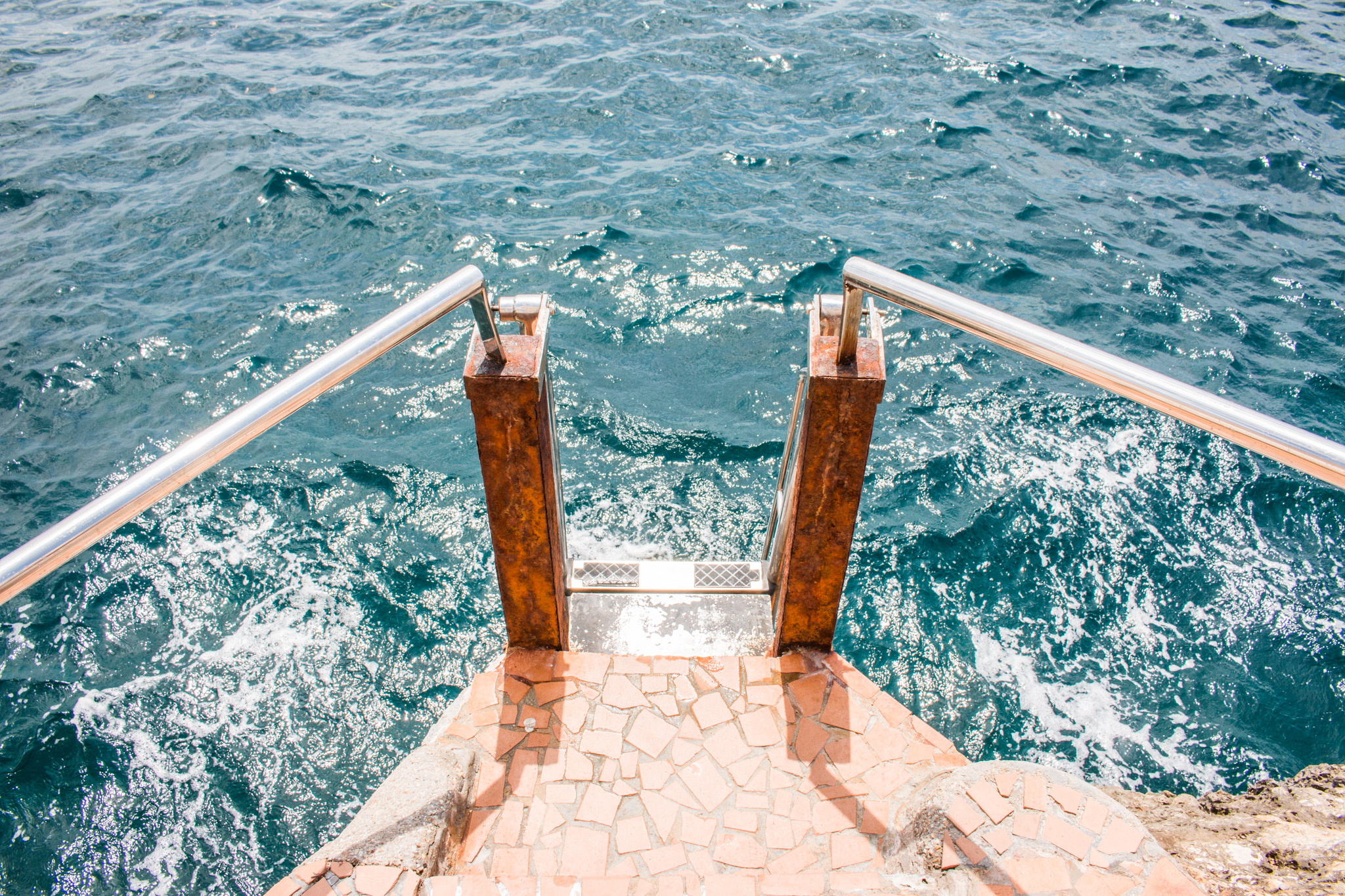 And the last steps lead straight into the Mediterranean.

The family has just spent their second summer in their apartment in Mallorca and they are more than happy with how everything turned out.
– Cala Fornells is a small place, but you have everything you need here. It only takes a minute to go down the hill by car, says Claes.
And when they feel like visiting the big city, Palma is just a short drive away.
– We really like Palma! It’s such a unique city. Small, but yet with such a big range, and so international, Maria says.
– Yes, we really do have a good base here. It’s not far from anything, Claes adds.
Although the plan was to get a place for nice, sunny summers, Claes and Maria have discovered that Mallorca is as beautiful in the fall.
– I was here in October when I was on maternity leave, Maria says. It was lovely, everything quiets down a bit when the peak season is over. It’s wonderful knowing that we can come here and live like this almost all year around.
Text: Maria Strömqvist
Photo: Ida Carlsson

By Buy a Home Mallorca
0
apartmentbuy a homeCala FornellsmallorcaPeguerareal estate agencyrealtor
"In Sóller we find inspiration for our novels"
"The nature, the light, the sea – inspiration is everywhere" 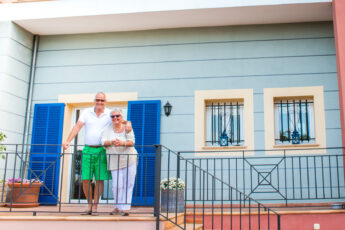 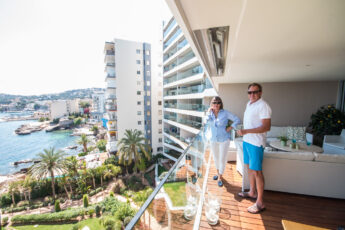 This loft-style house is definitely one of our all

The good life is waiting for you with this flat in

Mallorca is always a good idea 😍 One way tick

Women rule the world - at least at Buy a Home Mall

Sometimes heaven is a place on earth 📍 Coll Bai