In one of Palma’s busiest restaurant streets in Santa Catalina there is a small, charming townhouse. Here, just a few steps from the buzz of chattering people and sound of coffee cups and wine glasses, is the home of Tove and Emil.
The apartment is bright and welcoming. The combination of old Spanish charm and Scandinavian, stylish decor gives it something extra. But it was far from love at first sight for Tove and Emil.
– When we came here the first time, it looked terrible, Tove says with a laugh. 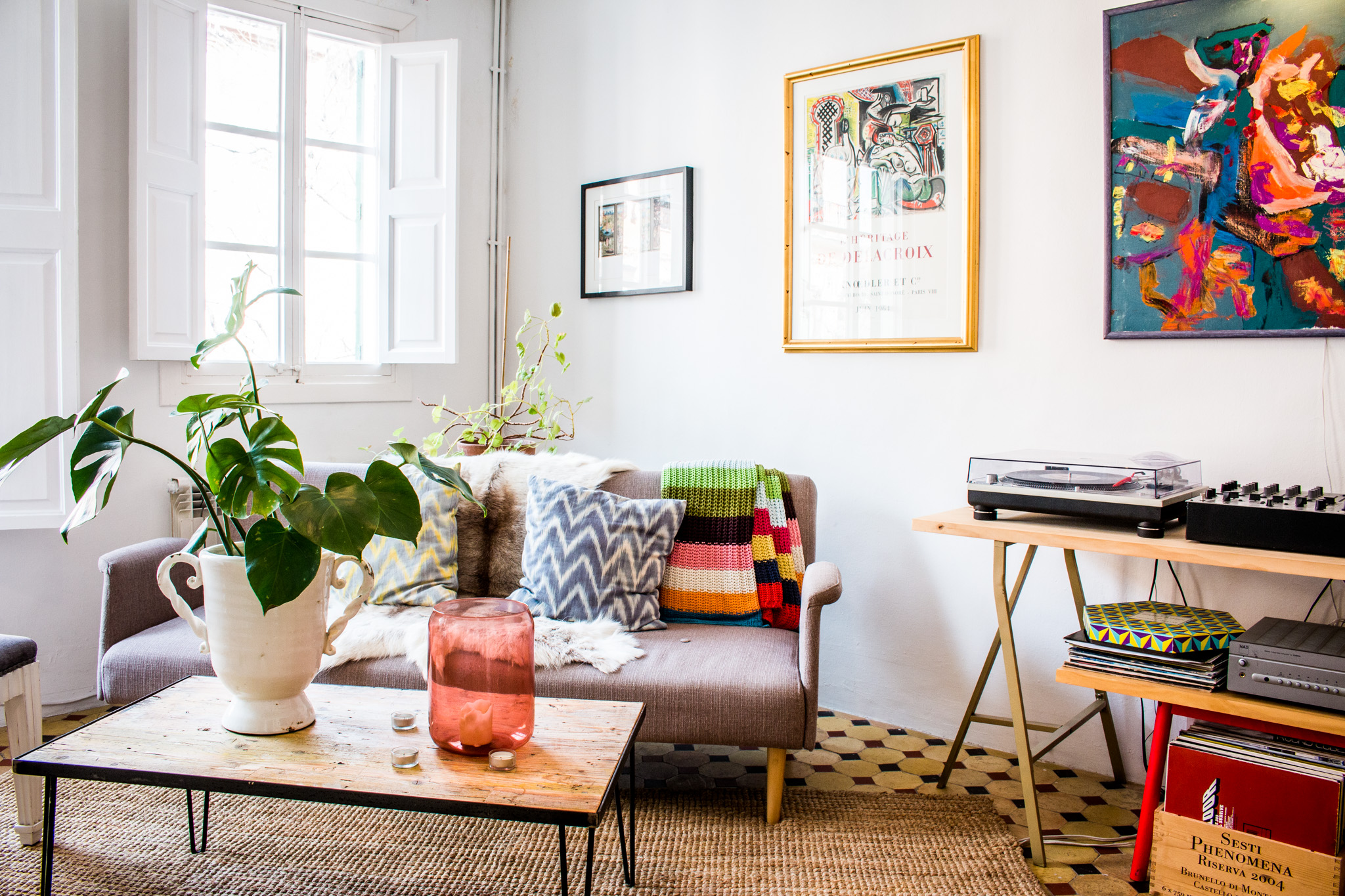 Light, colourful and decorated with love. 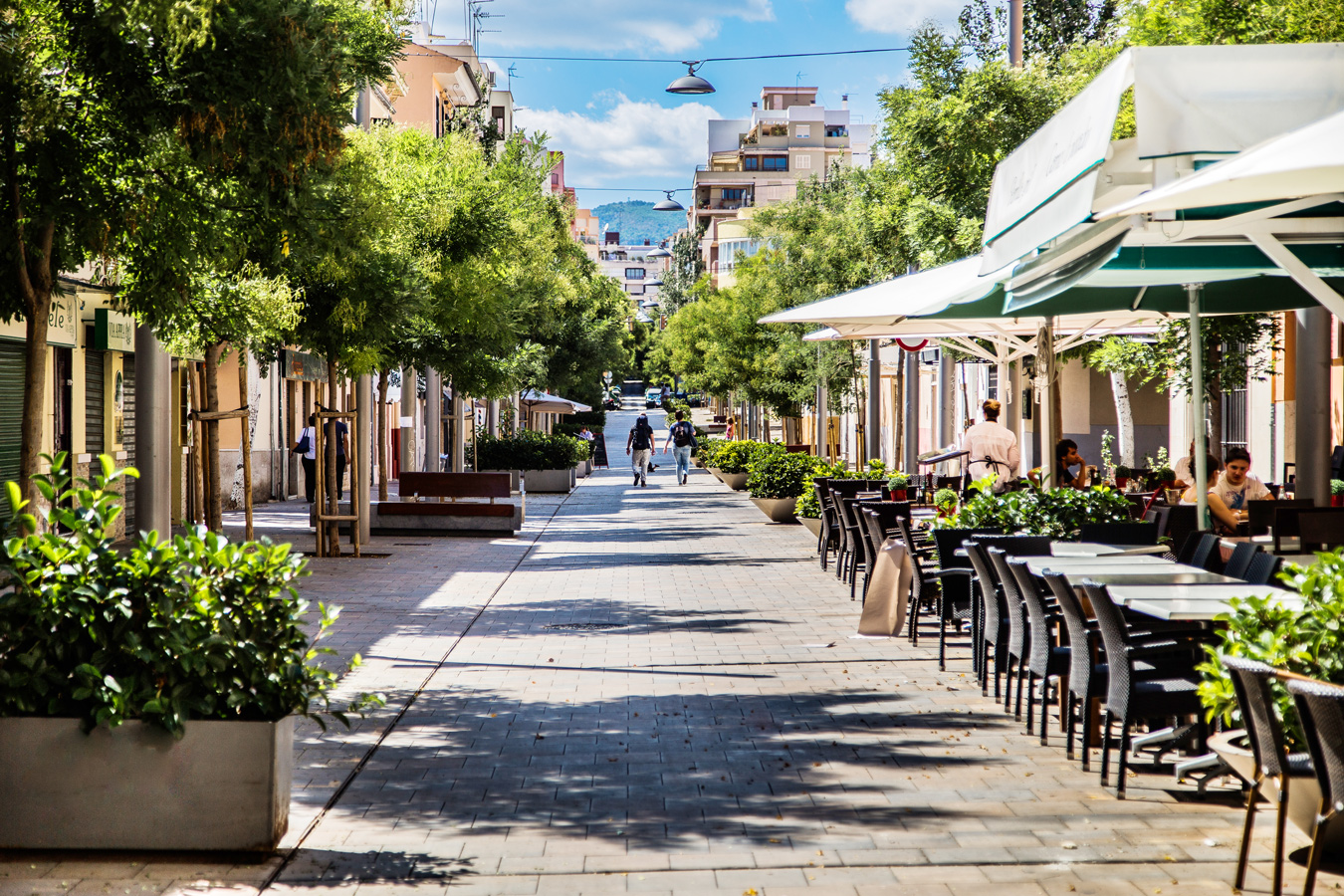 During the summer, the street is crowded by restaurants and people. Photo: Pablo Cuello Martinez

Tove and Emil were looking for an apartment to rent in the center of Palma and came in contact with a man who offered a flat in the middle of trendy, vibrant Santa Catalina. But when they stepped into the old townhouse they were shocked.
– Everything was just wrong. The entire apartment was dirty and worn down and it was really weird furnished. They were growing marijuana in the guest room.
– And there was a man sleeping on the couch, Tove adds.
Despite the bad condition, there was still something there that they found appealing.
–We immediately noticed the cool floors and could tell it had a special feeling to it. And of course, they offered us a good price, Emil says.
So they decided to take it, but it was not like they could move in straight away.
– We hired two maids who cleaned the apartment for two whole days, we repainted the walls in every room and donated all the furniture to charity, Tove says. 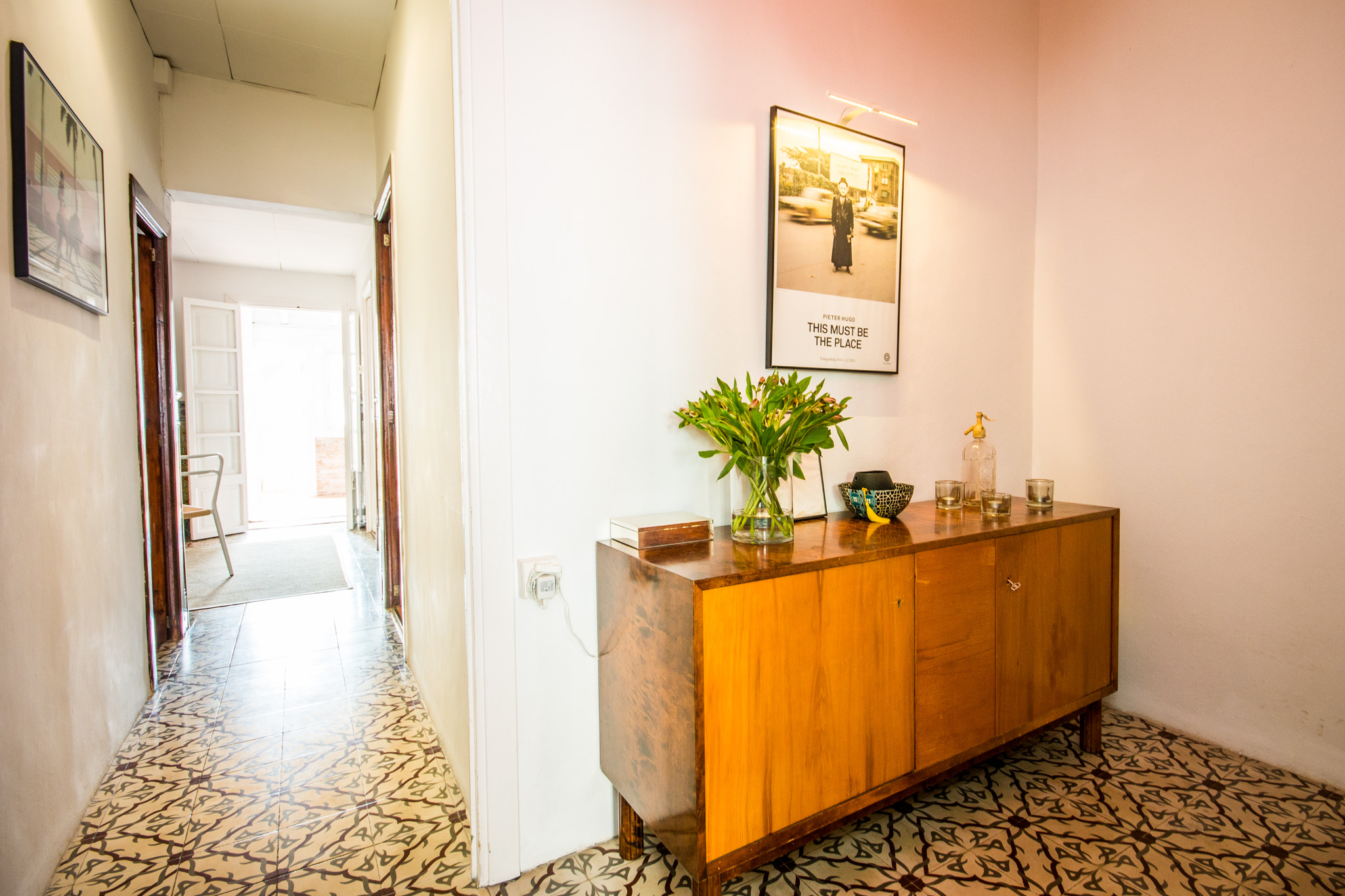 Windows and balconies in both directions makes the apartment very light all the way trough. 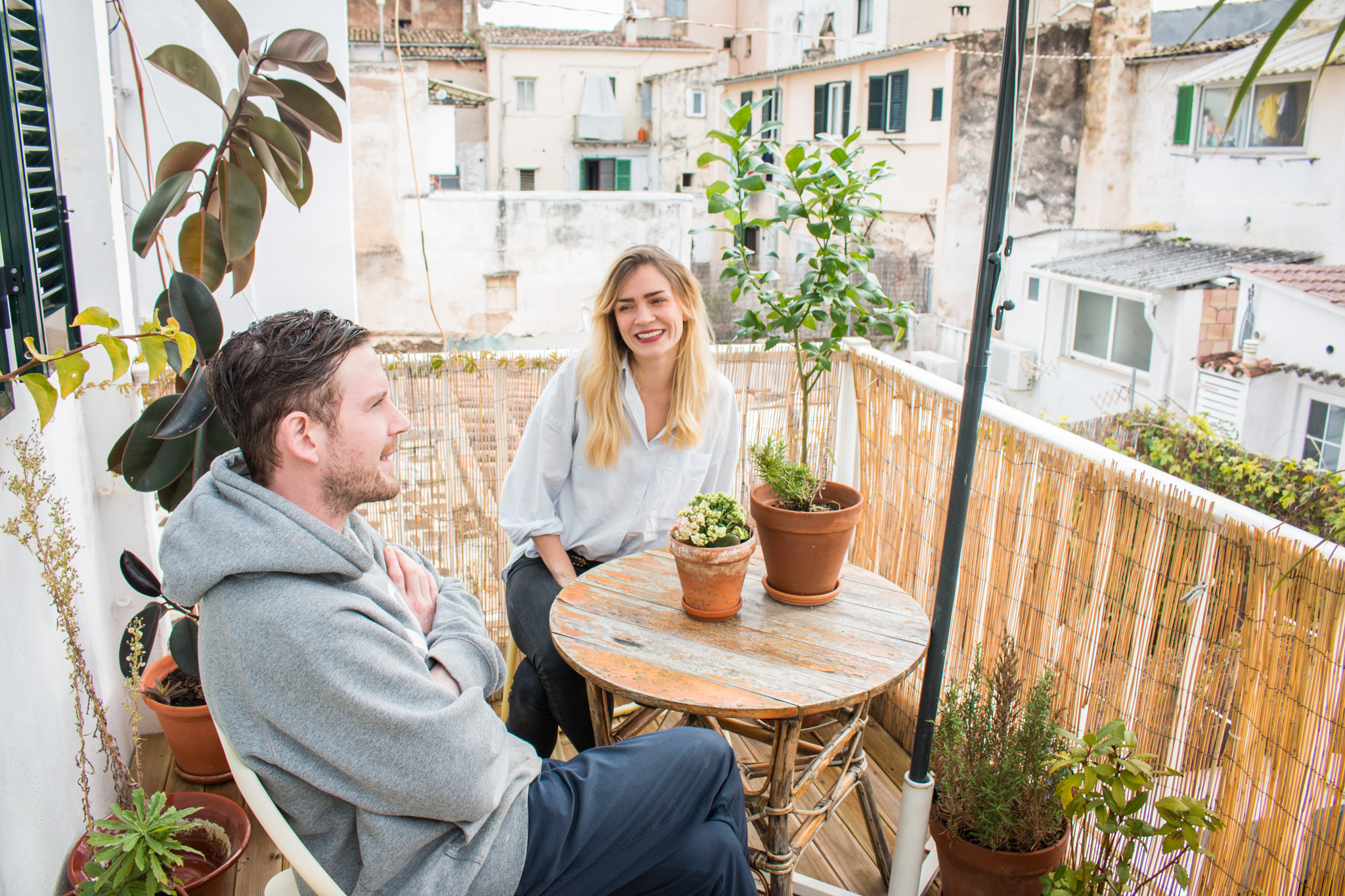 Emil and Tove found a rough diamond of an apartment.

It is the beginning of the season and so far there are only a few restaurants open on the street below, but during peak season the street gets pretty crowded.
– I like the sound of people laughing and talking, it’s homey in a way. I am not disturbed by it at all, Emil says.
– They are probably more disturbed by us, Tove says and laugh. Sometimes we sit on the balcony in the evenings, listening to music and drinking wine, and you can really feel how people are looking at us, thinking “I wonder how it is to live there.” 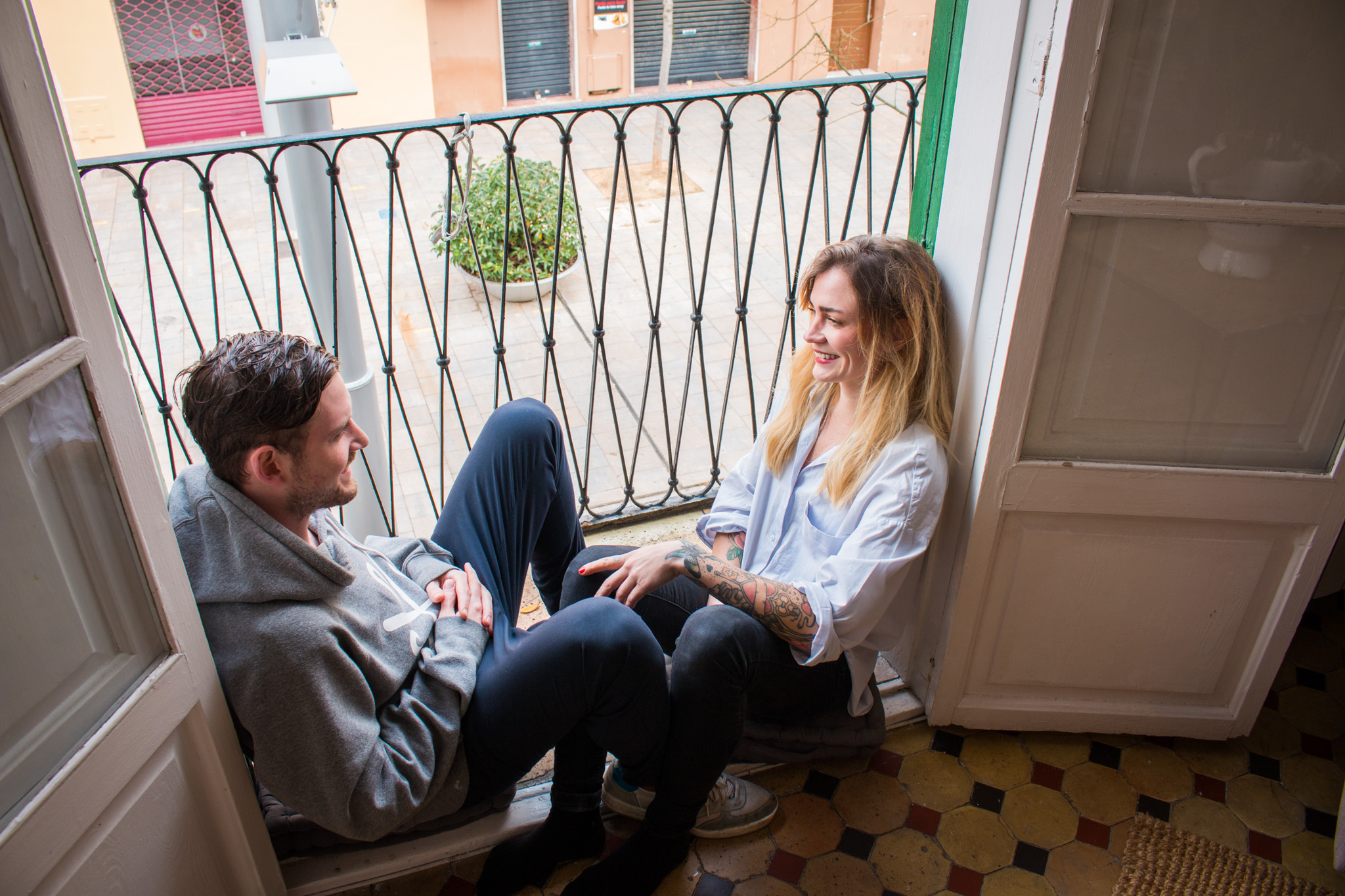 Emil and Tove enjoys living in the vibrant heart of Santa Catalina. 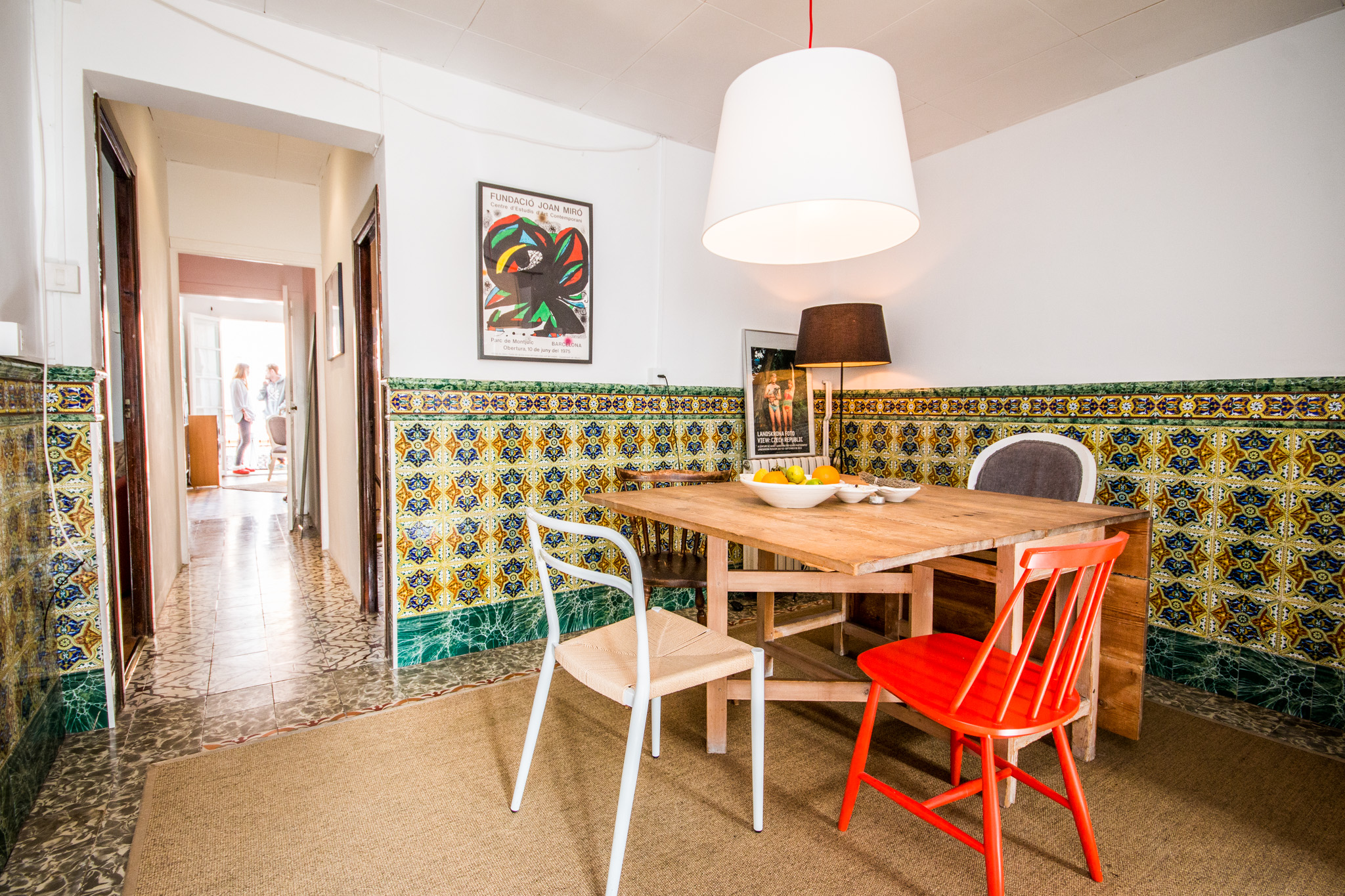 Tove and Emil have lived in Mallorca since 2015. Up until then they were working in restaurants in Sweden, but started playing with the idea of doing something different.
– We felt that we wanted to try something new. We had a few different options we could think of, such as Copenhagen, Berlin or somewhere in Spain, Emil says.
They knew that Tove’s former boss had an apartment for rent in Portals Nous in Mallorca and decided to call him.
– “It is free in four months and it’s yours if you want it” he replied.
Said and done. They resigned from their jobs and began planning their new life.
– We have always lived quite relaxed compared to our friends and we don’t really have the same form of rhythm in our lives. There are ups and downs and that kind of life does not feel as “accepted” in Sweden. We wanted something more, something different. It is easier to be more impulsive here, Tove says.
Much easier, as it would turn out. 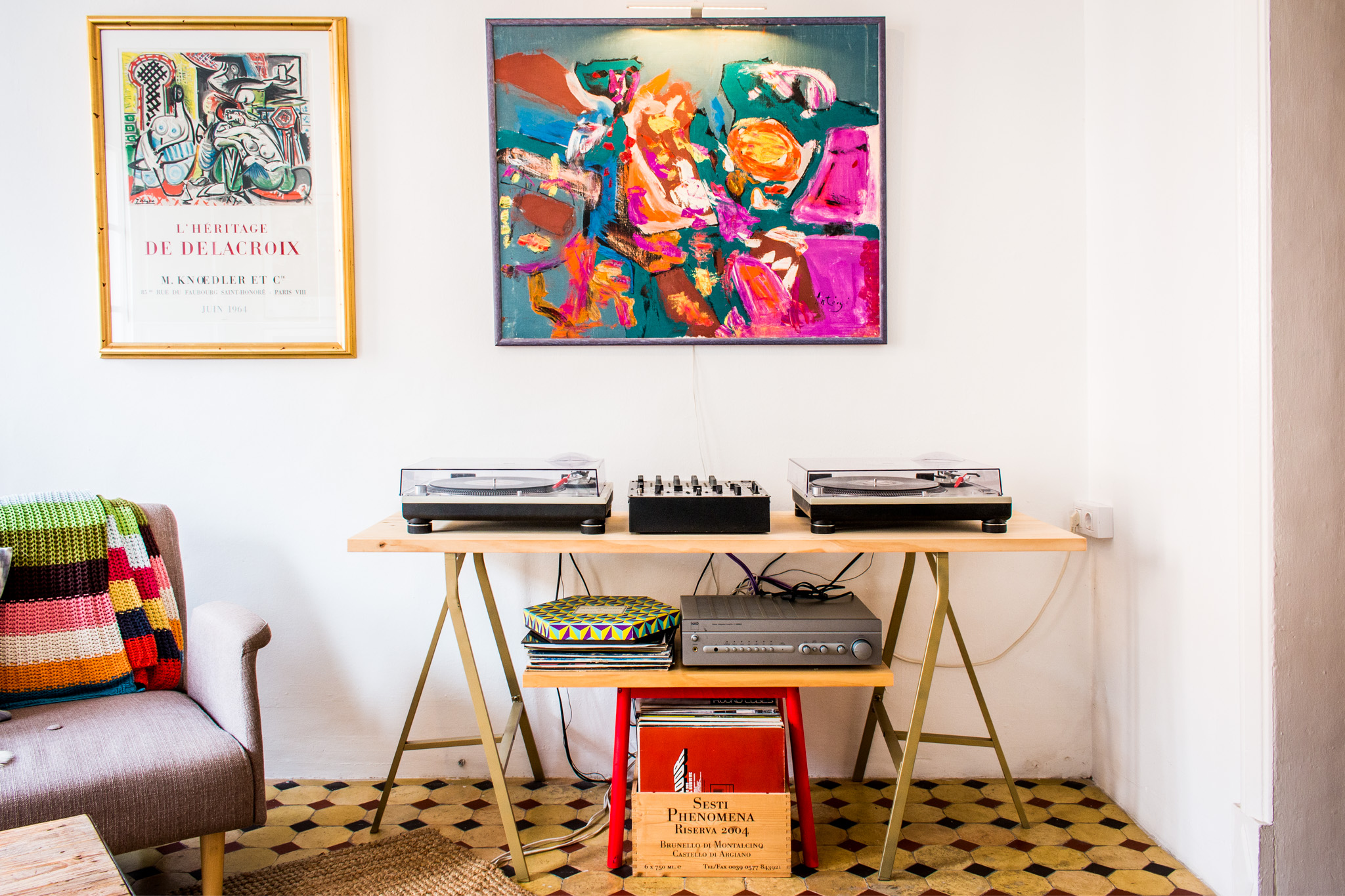 The DJ-table Tove and Emil built themselves 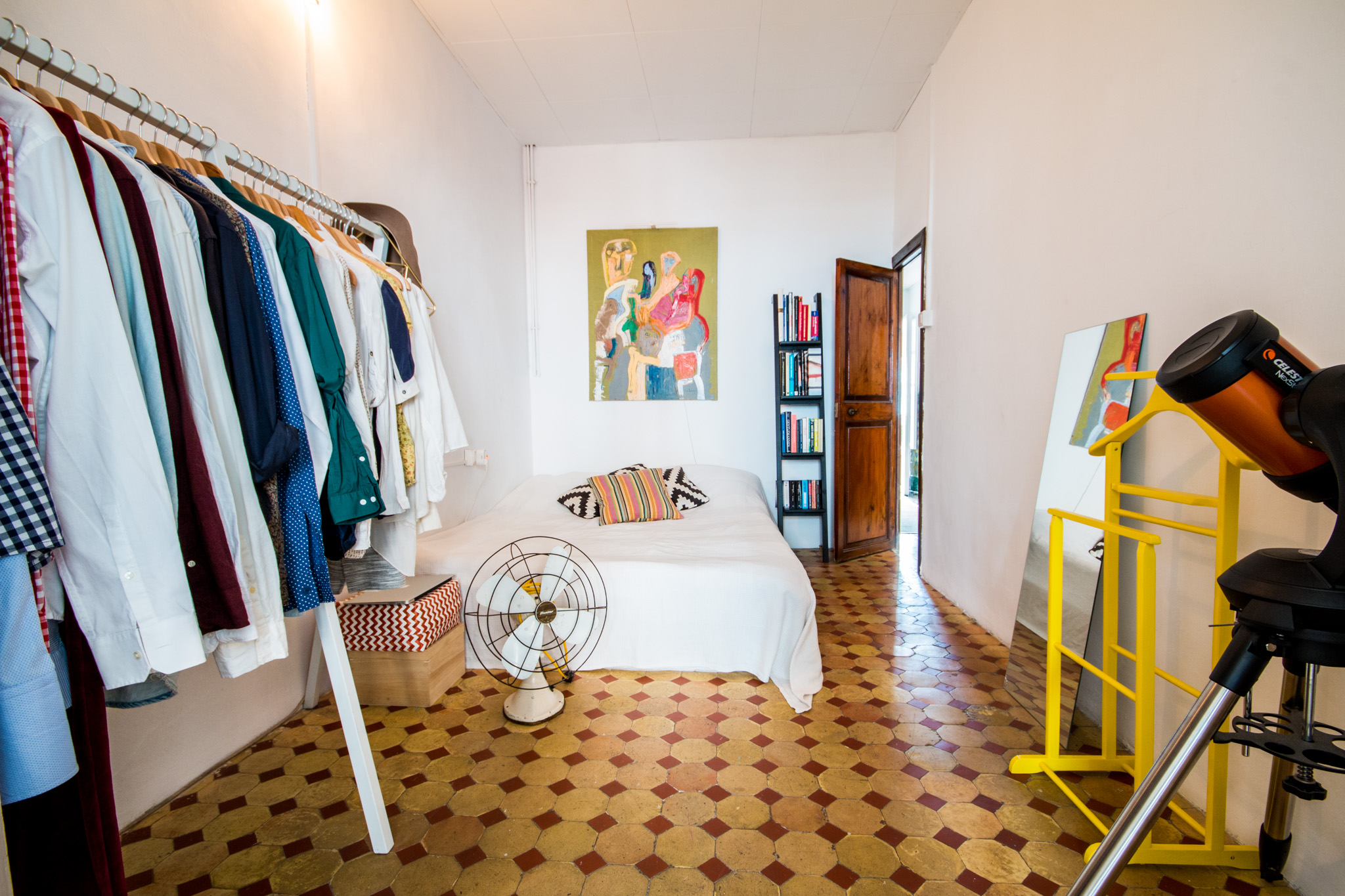 The bedroom is connected to both the dining area and the living room.

After moving to Mallorca they took the days as they came and explored their new home.
– During four months we just enjoyed the island. Living as if we were on holiday, Tove says.
The apartment in Portals was really lovely, but it was just that, a holiday home.
– The location was really amazing. We had a lift straight down to the beach, but it was more holiday feeling. It did not work when we needed to go back to reality, you know, Emil says.
When they both got jobs in Palma it felt natural to move closer to the city. And moving to Santa Catalina would come to mean so much more than just a new apartment. After moving into their new neighbourhood Tove and Emil quickly found their favourite bars and restaurants in the area. Especially one bar became like their second living room.
– We became regulars at Etoh, a bar just around the corner and started hanging out there quite a lot. 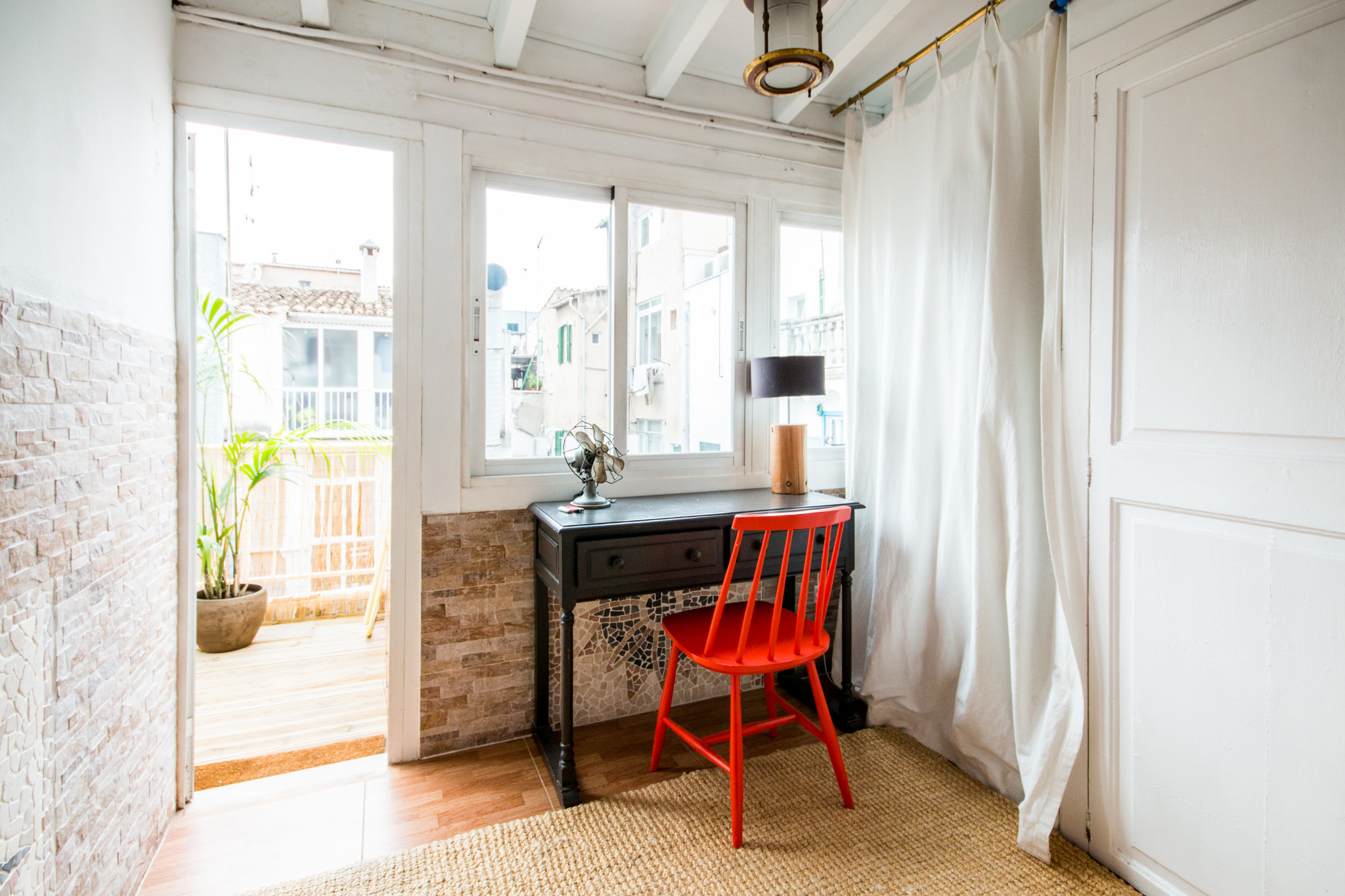 The apartment is 80 square meters and divided into several small rooms. 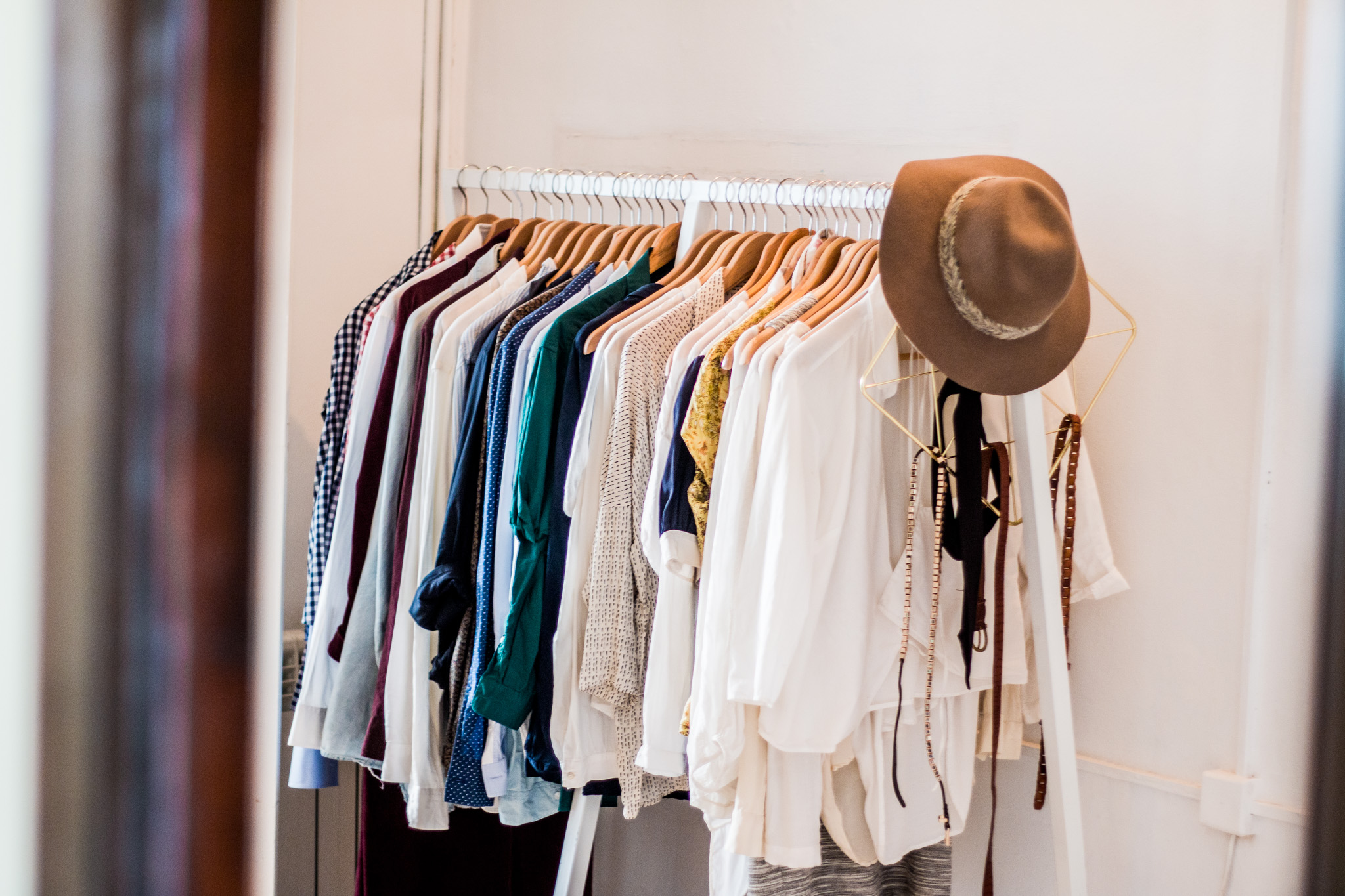 “We had a guest room at first, but then asked ourselves why we would keep an entire room for someone else in our home. So, we made a walk in closet instead!”

They got to know the owners who in time became really close friends.
– And then one day they invited us to lunch and said “we want to open a restaurant with you”, Emil says.
The owners of the restaurant already had a local in mind and the day after their meeting they made an offer for it.
– Four days later, all the papers were signed, Emil says and shrugs his shoulders. It took a couple of days for the whole thing to sink in and to understand what we had given ourselves into.
– We do things, then we think, Tove says with a smile.
There was no time to waste. The local for the planned restaurant was leased, the concept was all done and the name was settled. In November last year Balagan by Etoh opened in Santa Catalina.
– It has been better than expected and we have had more guests than we could dream of, Tove says. Since the opening in November last year, Balagan has gotten many really nice reviews.

Balagan, which means “chaos” in a positive sense, specializes in the Mediterranean cuisine.
– And that is all the Mediterranean, not only Spain, France and Greece, says Emil who is the chef of the restaurant’s and helped design the menu.
They are already thinking about opening more restaurants. Their dream is to be able to work more with developing concepts and have an overall responsibility than work in the restaurants.
– It would make it easier to open restaurants in other places too. That would be awesome.
With Palma as a start up they have great faith in continuing to work with their restaurant dreams in the future.
– You make contact with people from all over the world and opportunities appear everywhere. Palma truly is a melting pot of interesting people, Emil says.
– We may not stay here for the rest of our lives, but right now we are not even dreaming of anything else.
Text: Maria Strömqvist
Photo: Ida Carlsson

By Buy a Home Mallorca
0
long term rentalsmallorcaPalmareal estate agencyrealtorsanta catalina
"We only had eyes for the rustic beams, high ceilings and tiled floors"
"There is something truly unique about Molinar" 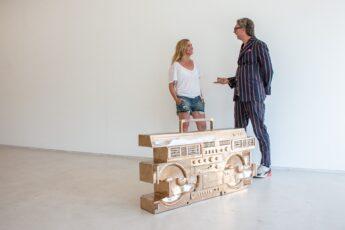 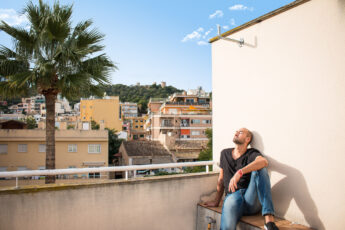 We all dream of such a terrace with this view, don

This garden lounge is the perfect spot to rewind a

Let's go and explore all the hidden gems in Mallor

Reading a good book here while sipping a glass of

Welcome to your new modern home with sea view and

Our favourite shades of blue 🌊 Can you guess w

Who of you has already been brave enough to take a