Close to one of Palma’s most popular shopping streets, there is a small residential building with only four apartments. The penthouse, a duplex apartment, is the home of Andreas Lindén, a Swedish professional triathlete. 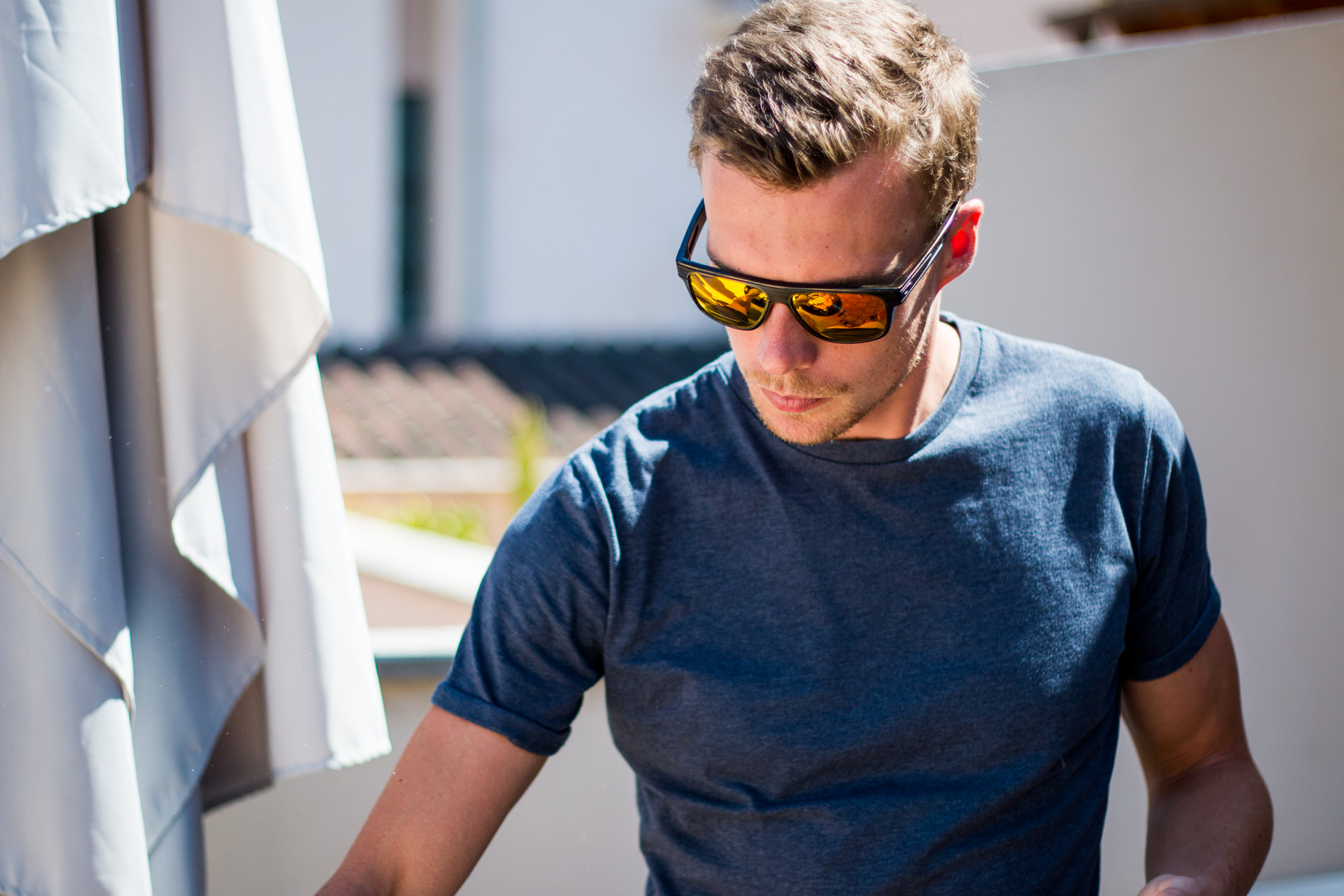 Andreas Lindén moved his training base to Mallorca in 2011.

Just across the street there is a swimming pool and the ocean is only a couple minutes away.
– Seen from a training point of view, Mallorca is absolutely amazing, Andreas says.
Ever since he went on a training camp with the triathlon school in 2006, the small Mediterranean island kept a special place in his heart.
– I have been to many places and trained since then – Italy, France, Portugal, Gran Canaria – but nothing can compete with Mallorca. 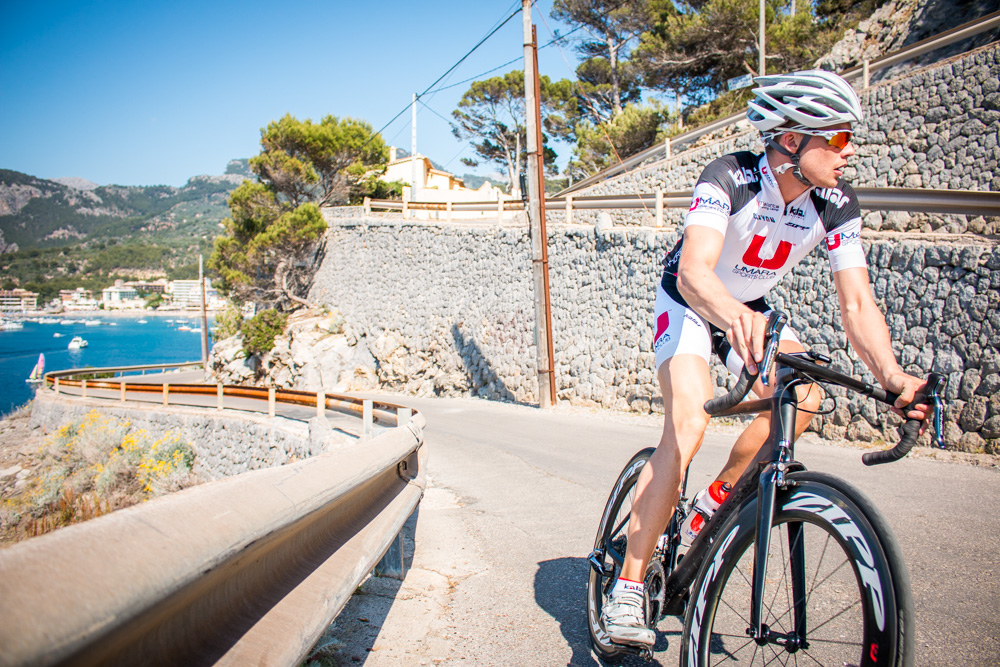 There are numerous roads perfect for cycling in Mallorca. The photo shows Andreas going uphills to the lighthouse in Port de Sóller .

In 2011, he decided to move his training base to Mallorca to be able to practice as much as possible and participate in the many competitions held on the island.
– For such a small island, there is so many competitions every year. And everything is so close. No matter where you are heading on the island, it will take you maximum of one hour to get there.
And being able to practice in these conditions, showed results. Last year, Andreas came in fourth in his first Ironman and now he is focusing on Challenge Roth.
Together with his girlfriend Ida, he also began to arrange training camps for triathletes and cyclists. This year it is on a temporary break, so that Andreas can focus on his training and other job as a coach. 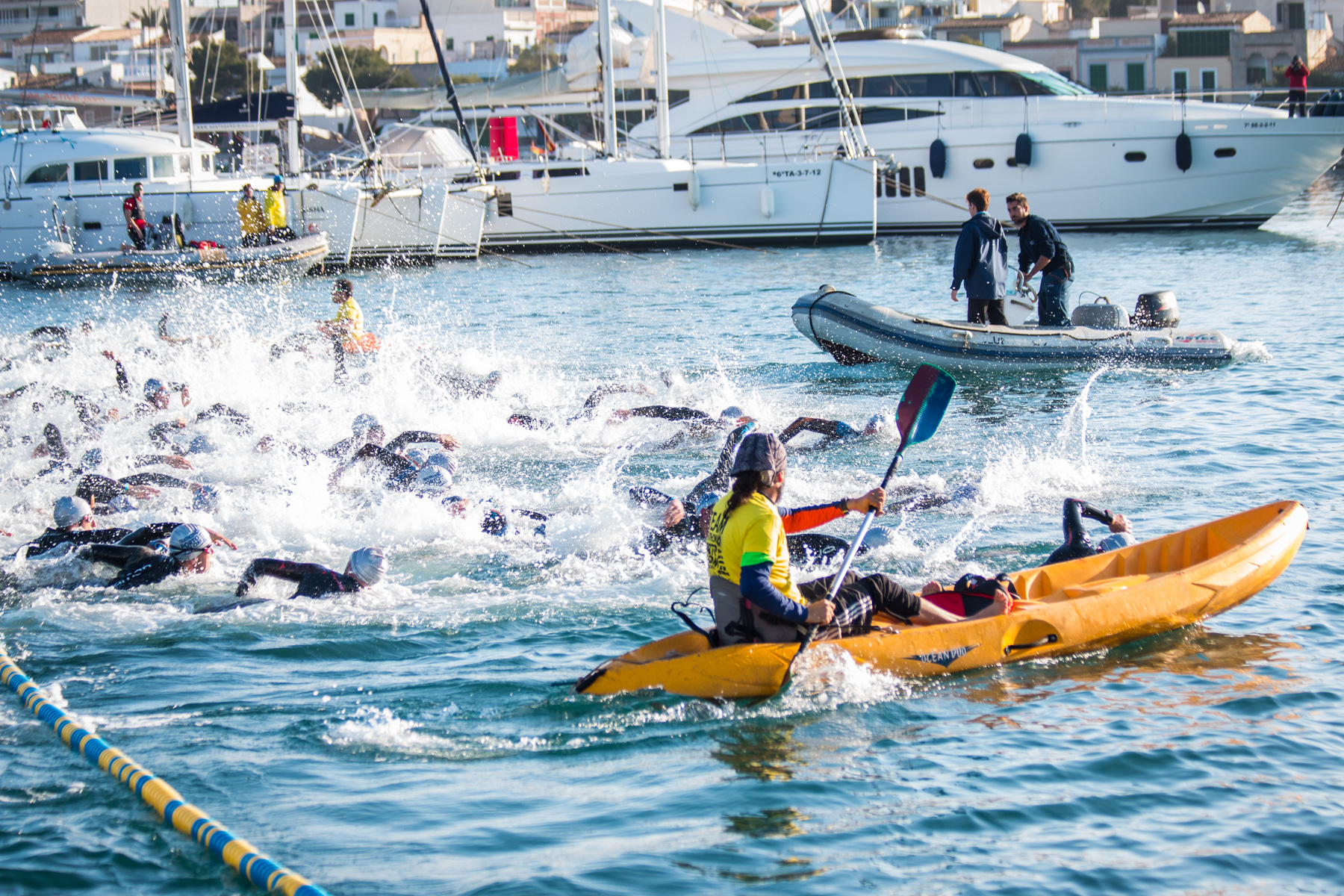 All year round you can sign up for triathlon and duathlon races. This one in Portocolom International Triathlon. In his best race, Andreas ended up 2nd, in the short version of the competition.

An apartment with a roof terrace

The apartment is divided into two floors. The bedroom, office and a bathroom is located on the ground floor. The stone walls, tiled floors and narrow stairs with wrought details, gives you a modern Mediterranean style. 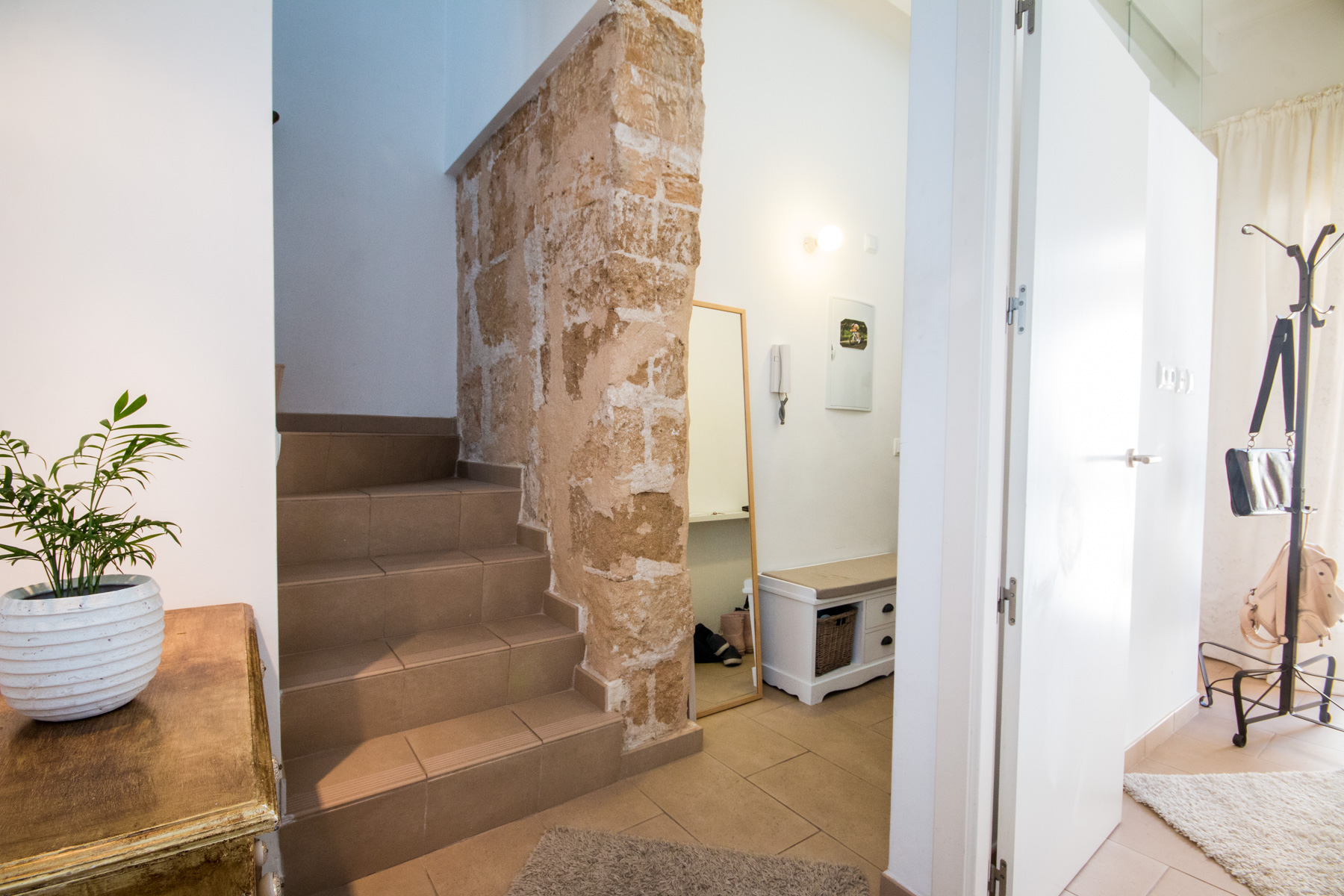 This is the hallway with the stairs that leads to the top floor. 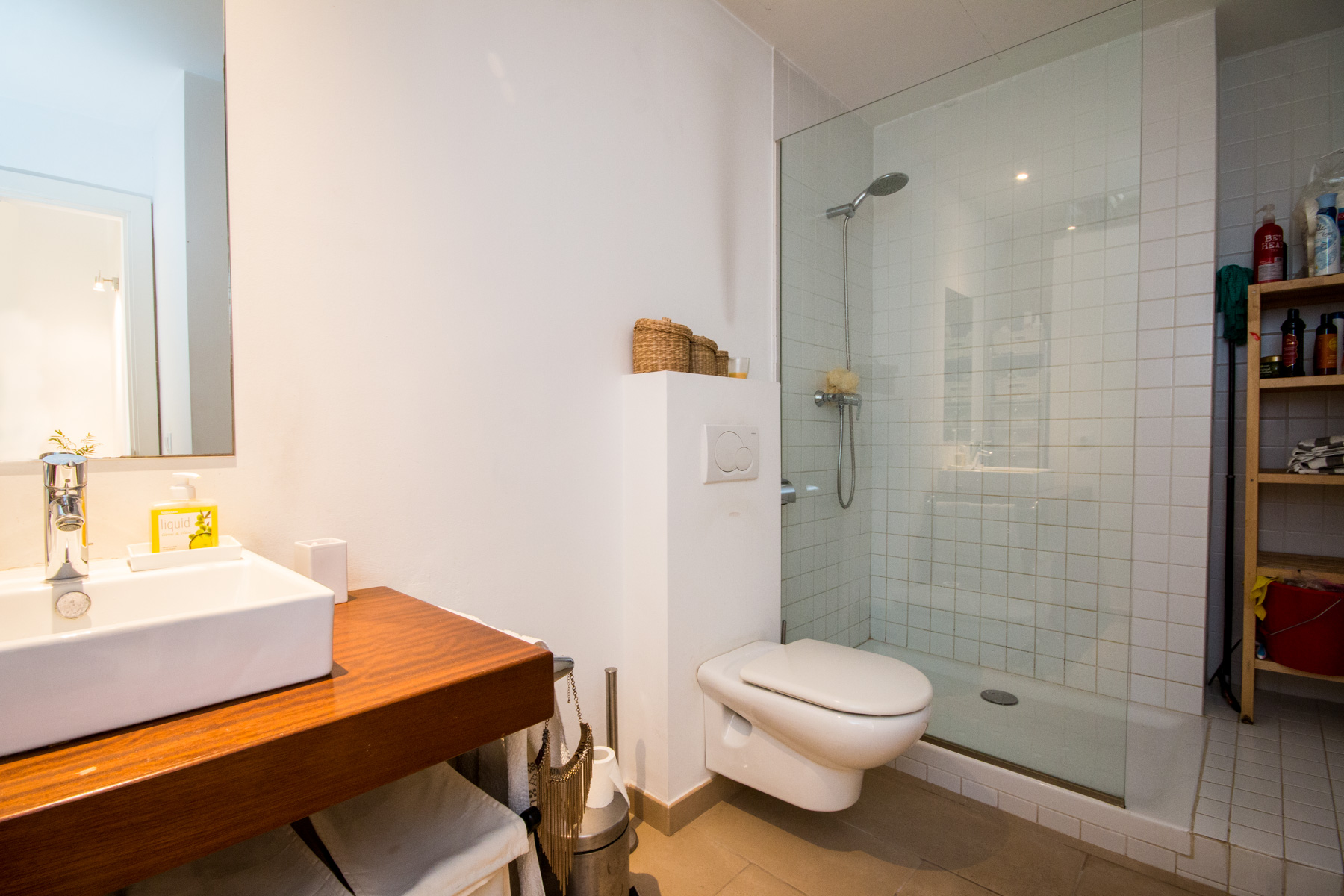 A white and modern bathroom on the first floor. 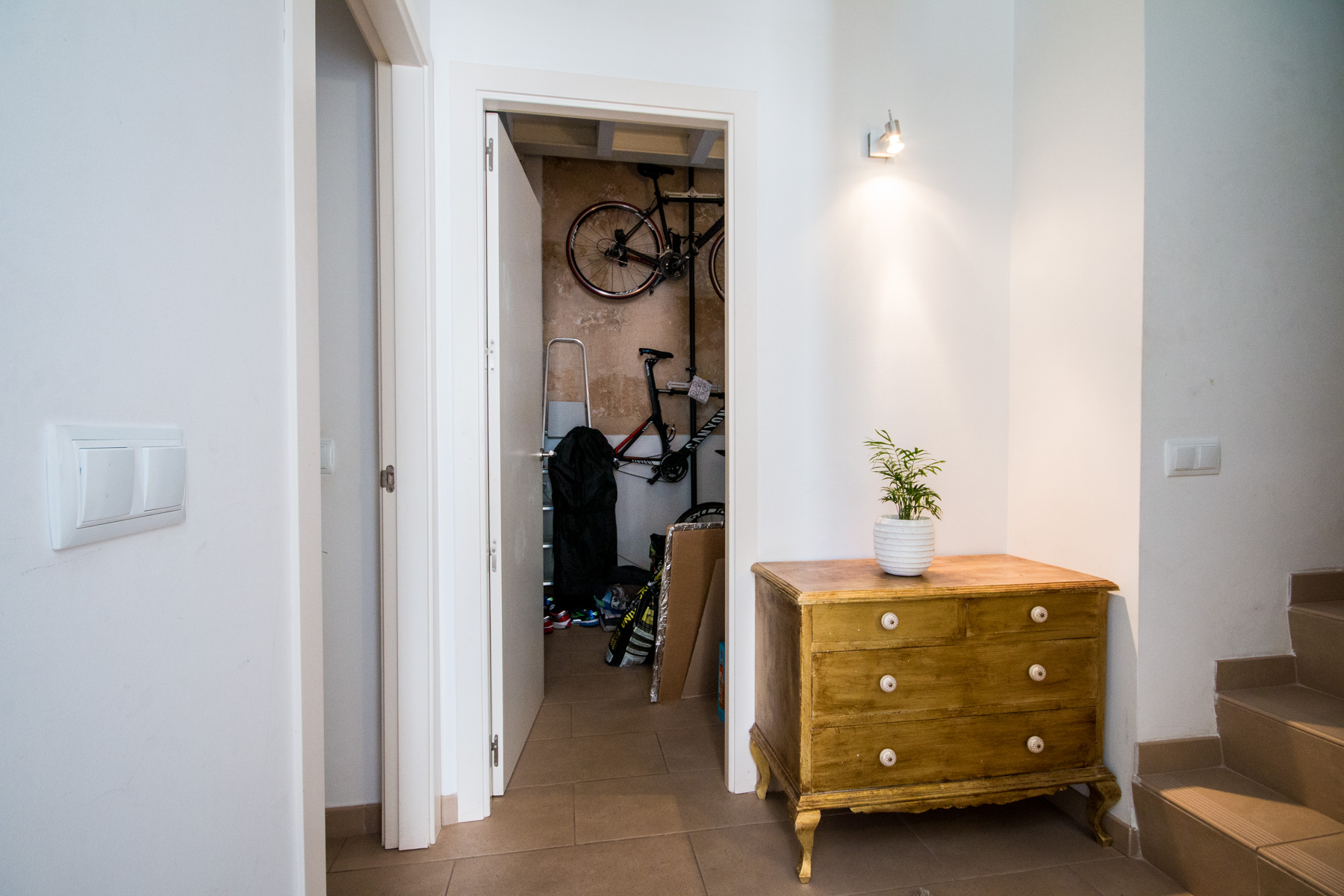 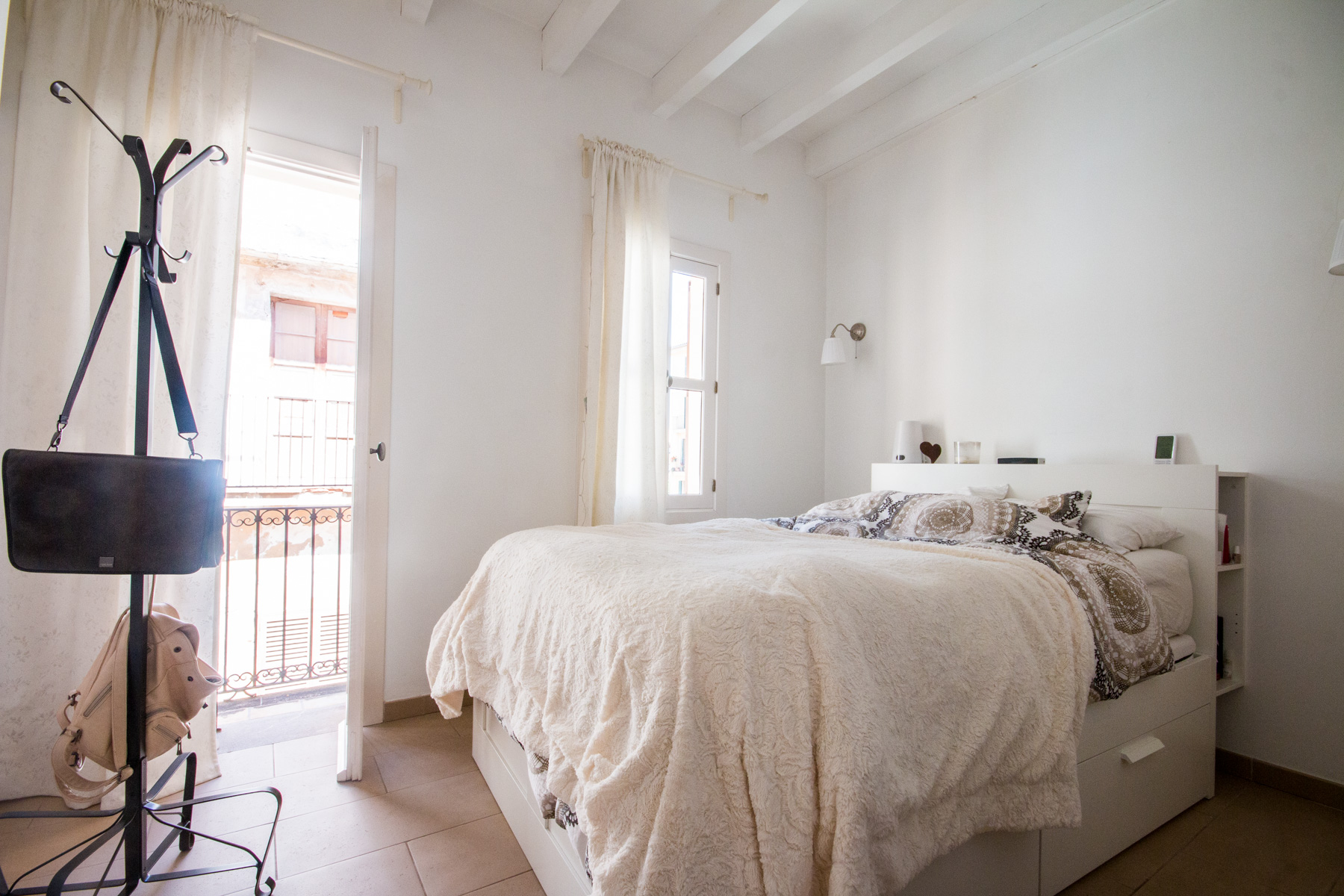 The bright bedroom with an exit to a small balcony.

The upper floor has an open kitchen/living room and access to the roof terrace. Apart from the stone walls, everything else is white. The style is minimalistic throughout the apartment. Not a single painting or photo is hung on the walls. 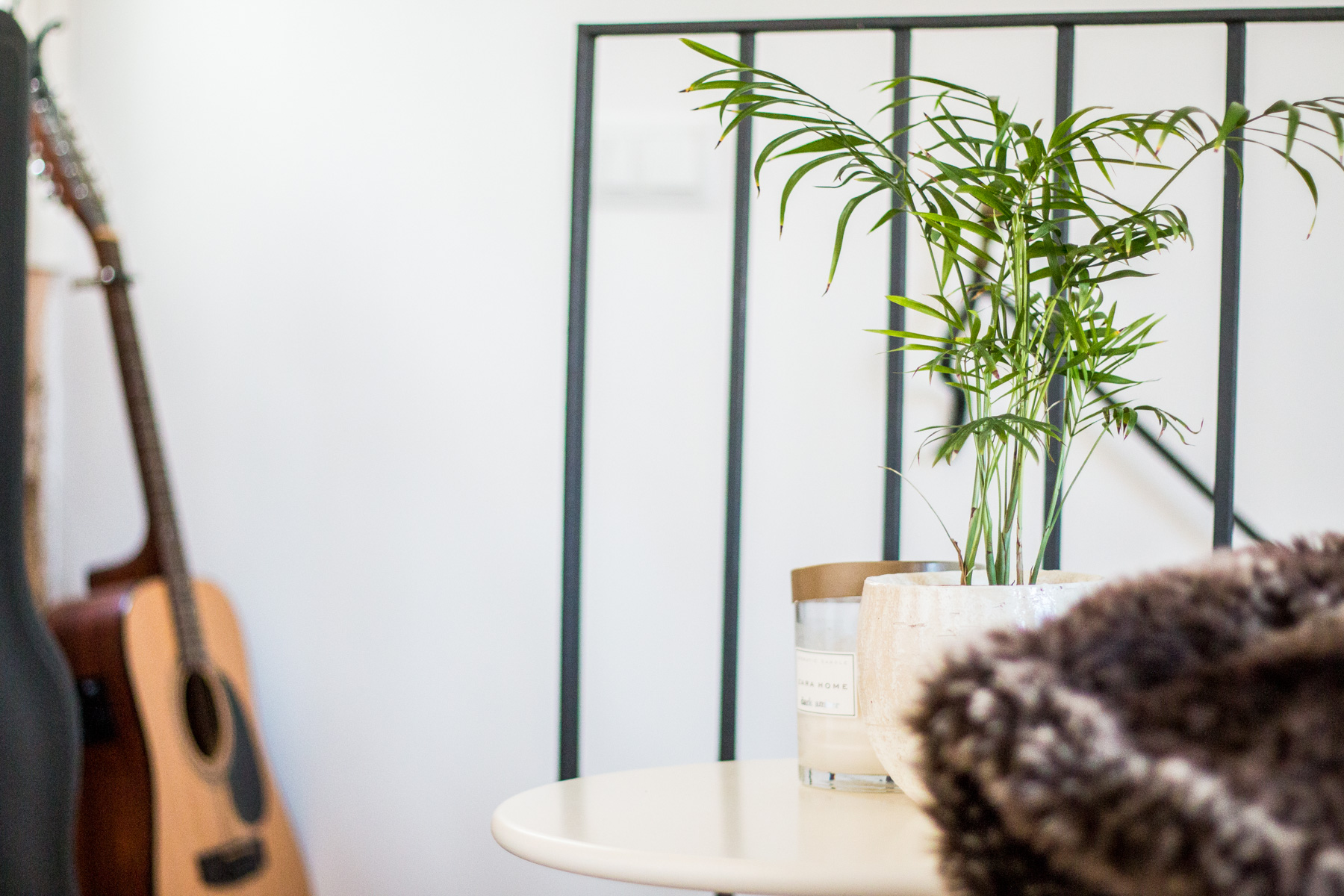 You can’t find a lot of interior design details in here, but green plants creates a calm atmosphere. The kitchen table and chairs came with the apartment. Andreas is planning to change them for something new.

– Since we also spend a lot of time in Sweden, furnishing and decorating this apartment is an ongoing project. But we think it is fun to make things ourselves, we have built the coffee table out of two wooden pallets and we made a shelf out of another. It has become a bit of a theme, Andreas says with a smile. 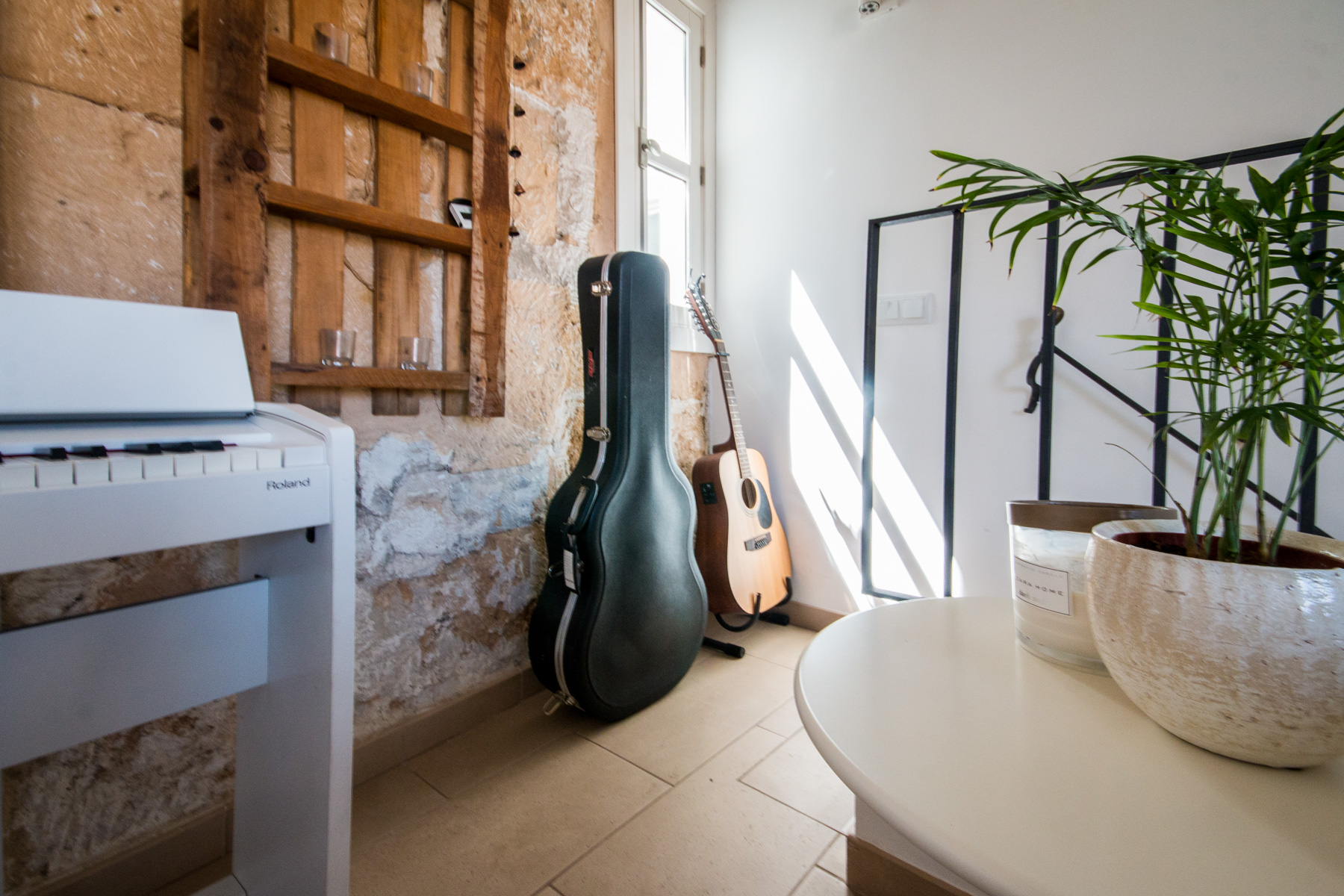 Music is important for Andreas who plays the guitar. Ida, his girlfriend plays the piano. 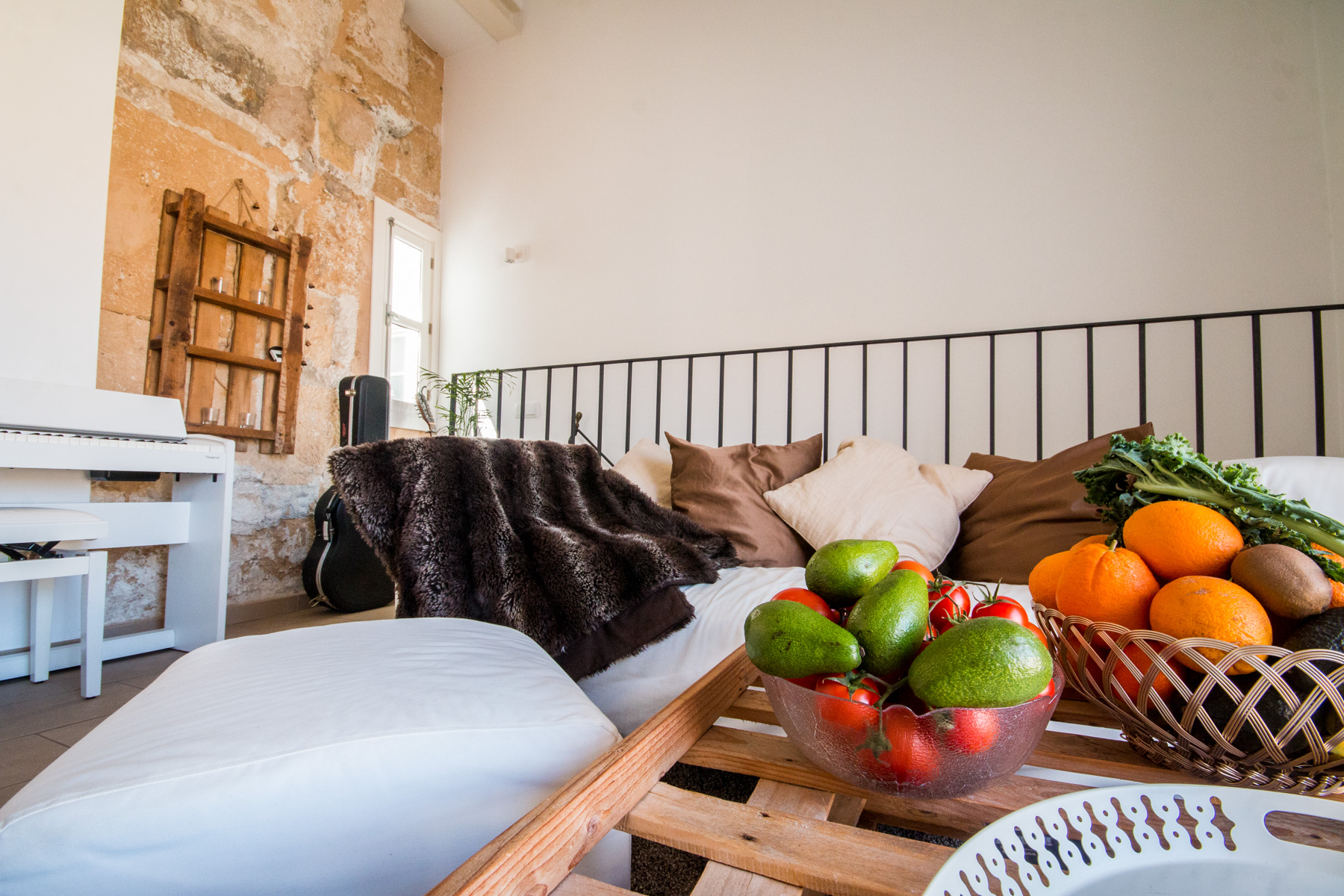 Every weekend the couple visits the eco market at Plaza Patines to buy fresh fruits and vegetables.

-We will put some paintings up eventually, he adds.
On sunny days, which is most of the year in Mallorca, the double doors to the roof top terrace are wide open.
The spacious lounge sofa, the barbecue, citrus trees and the large umbrella makes the terrace feel like an extension of the apartment.
– We spend a lot of time out here. During the hottest months you can hang out here day and night. Sometimes we even sleep under the stars, Andreas says and lights up the barbecue. 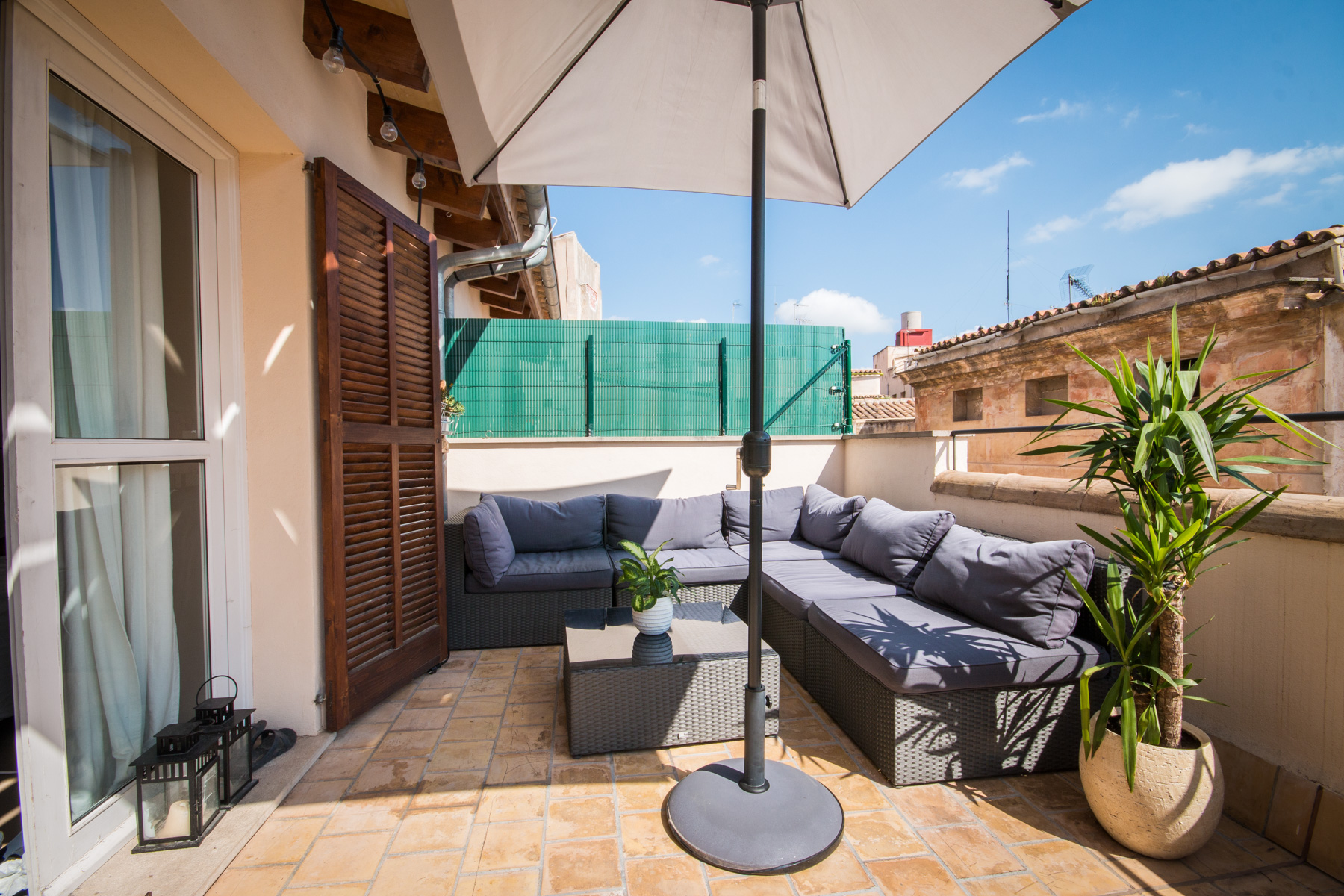 A lot of time is spent here between April and November. Andreas likes to take a nap after the first training session of the day. Then he stays in the shadow and works with his computer. 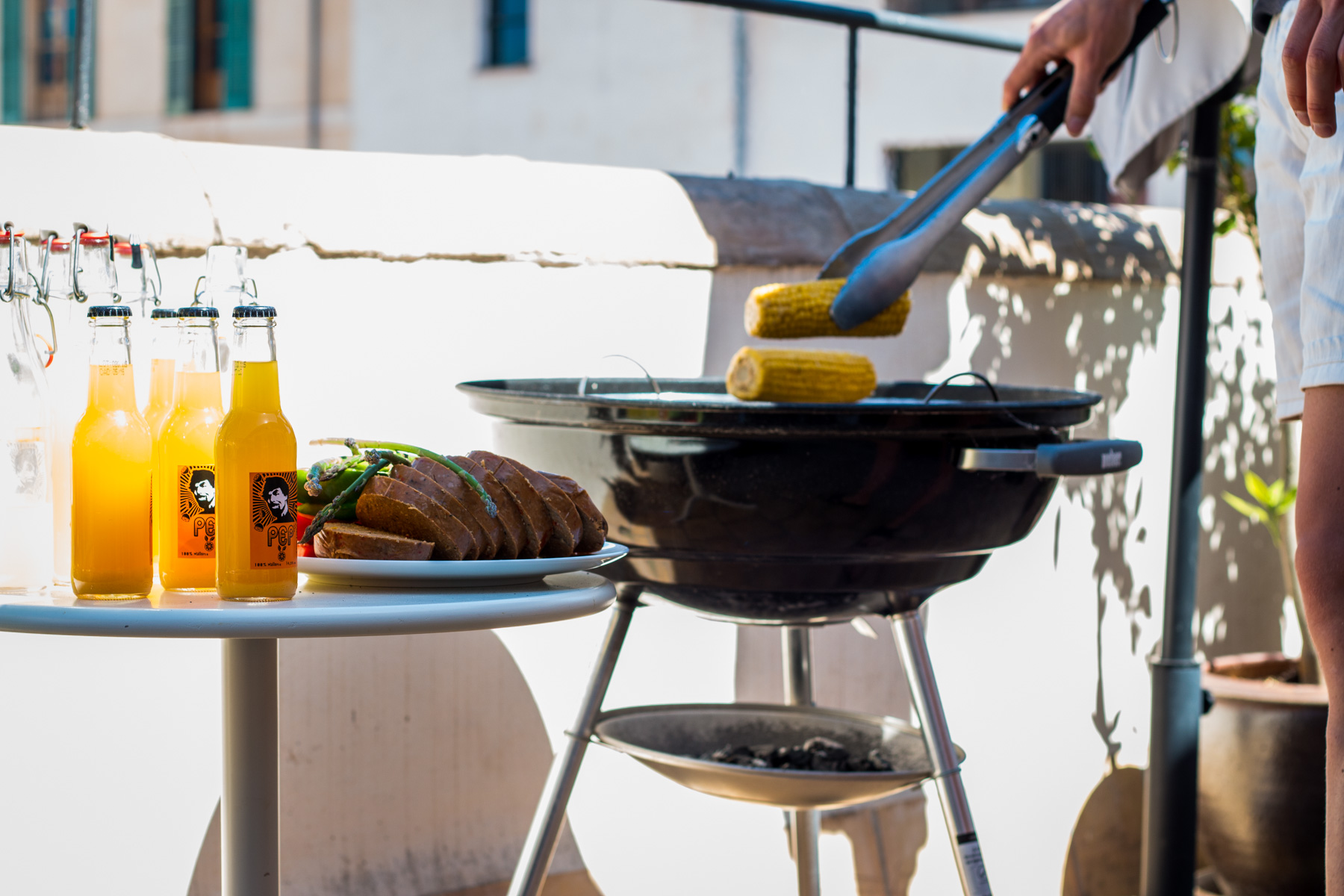 Nothing else than plant based foods is grilled on this barbecue. 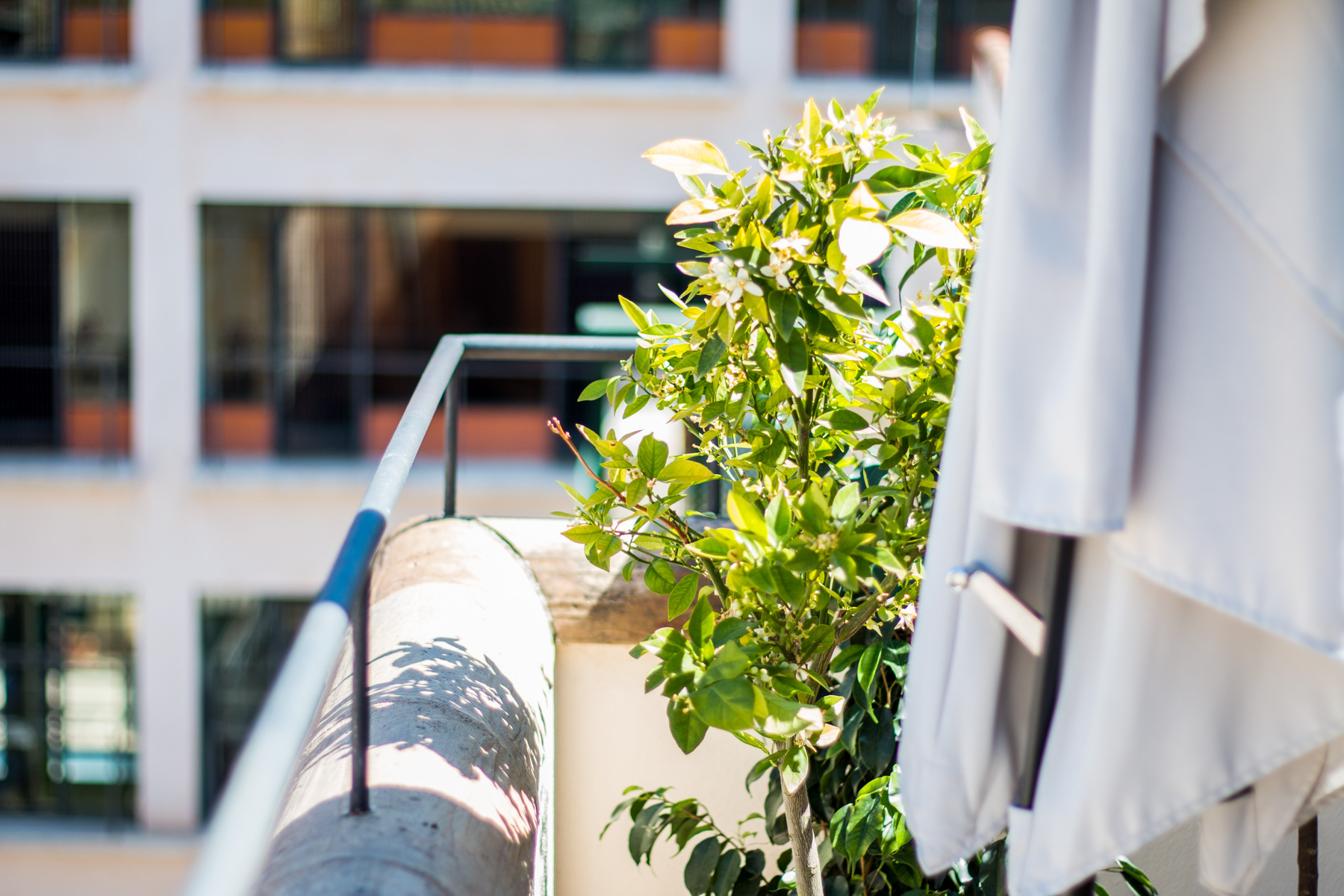 The citrus trees has not given fruits, yet. But maybe this winter?

Corn on the cob, peppers and vegetarian burgers are on the menu. On the coffee table, there are several bowls filled with fruits and vegetables. Tomatoes, avocados, clementines, bananas and small Mallorcquin plumbs.
– None of us eat meat, so we usually go to the organic market at Plaza Patines on Saturdays and buy fruit and vegetables for the entire week, Andreas says. 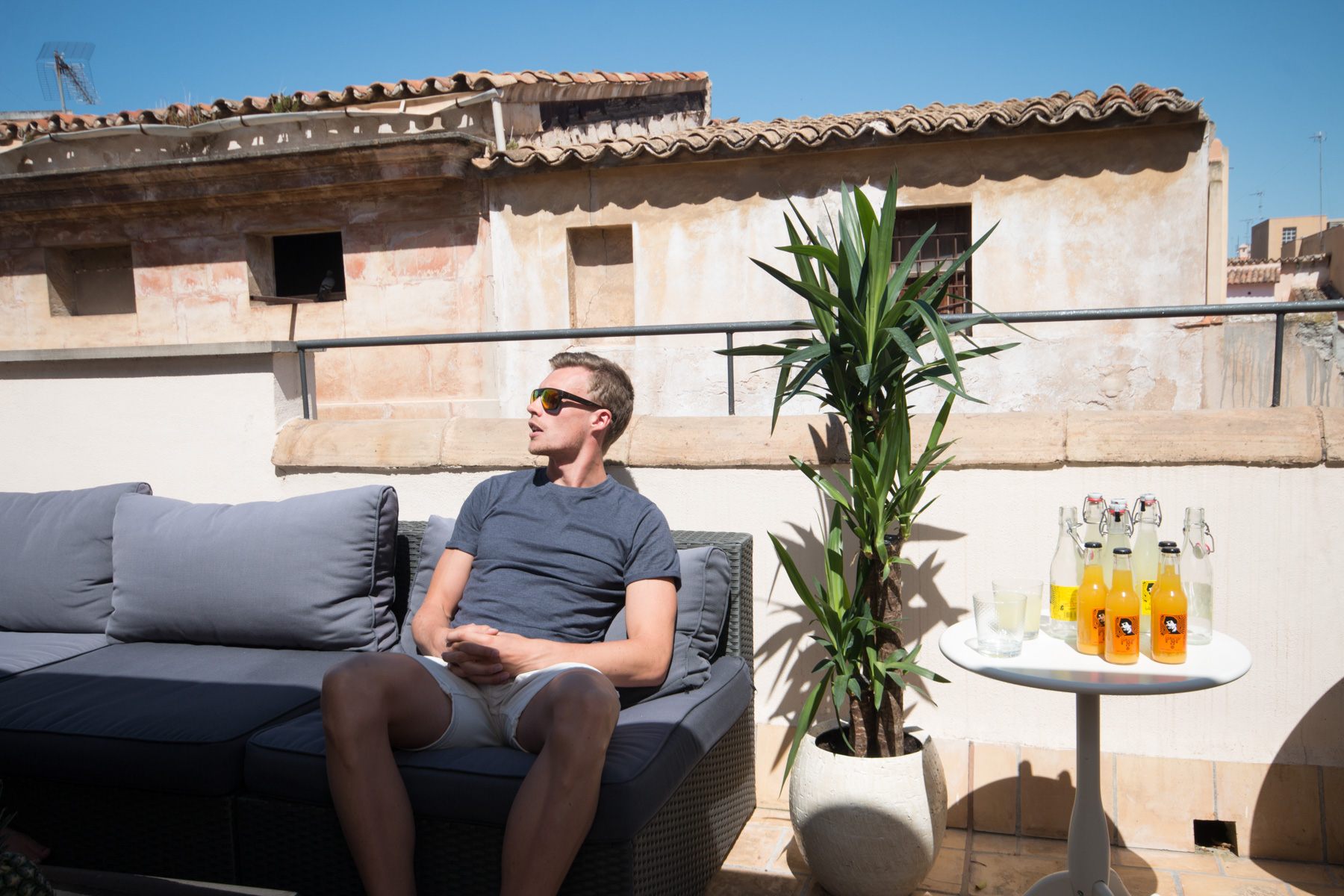 Andreas favorite beverage for any occasion is placed on the table. You can almost always find them in his fridge.

Although Andreas lives in the centre of Palma, he is close to his training regardless if he wants to go for a swim, run or a bike ride.
– I do not need to drive anywhere, I can just walk right out the door and go. And depending on which direction I choose, the terrain is different.
Miles of flat roads, hilly and winding or steep mountain roads, the options are many.
– It is one of the biggest advantages of living here. That there are so many paths to choose from. Mallorca is unique when it comes to training opportunities. Half the island is hilly and half of it is almost entirely flat, he says. 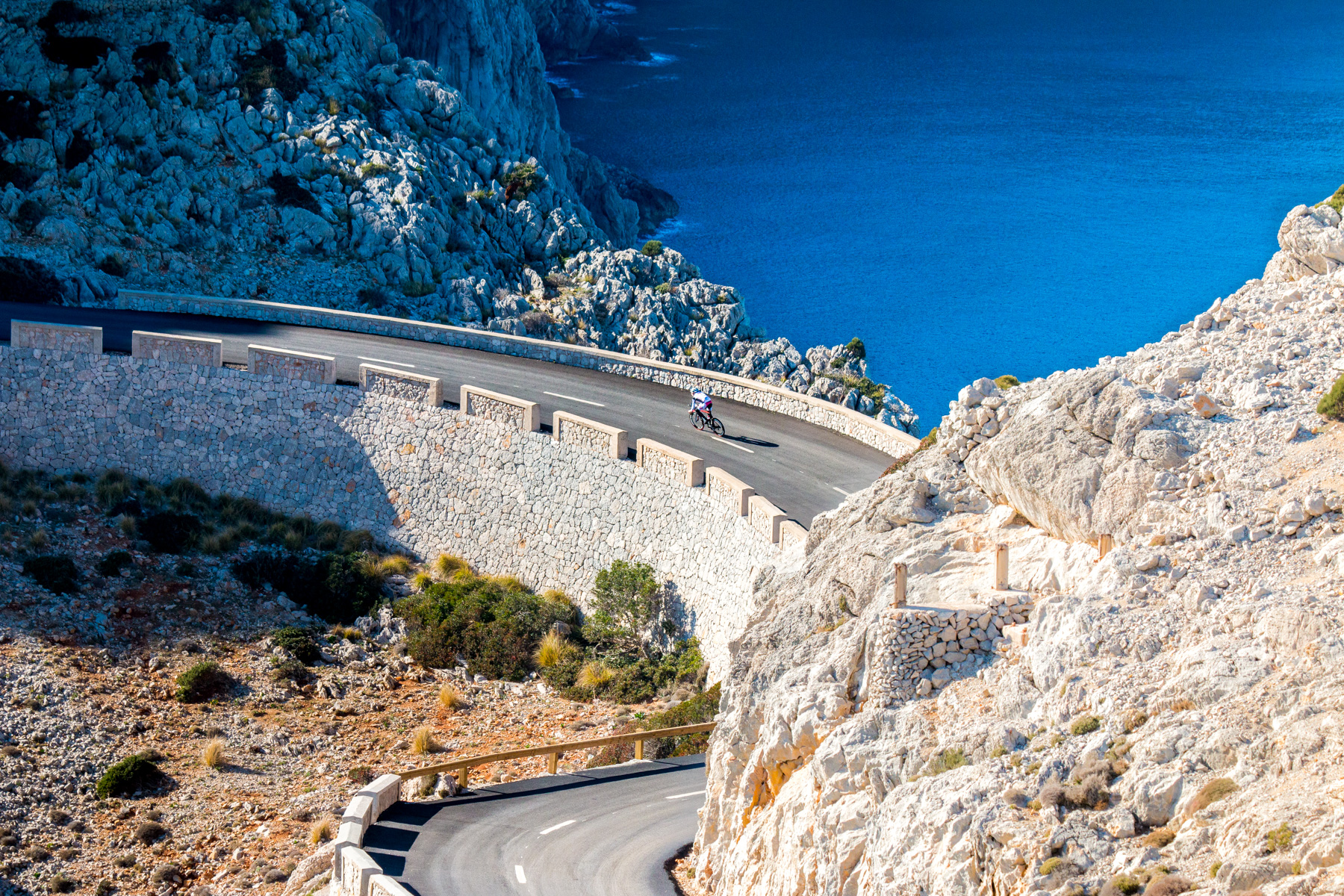 This photo is shot in Formentor in early 2015. 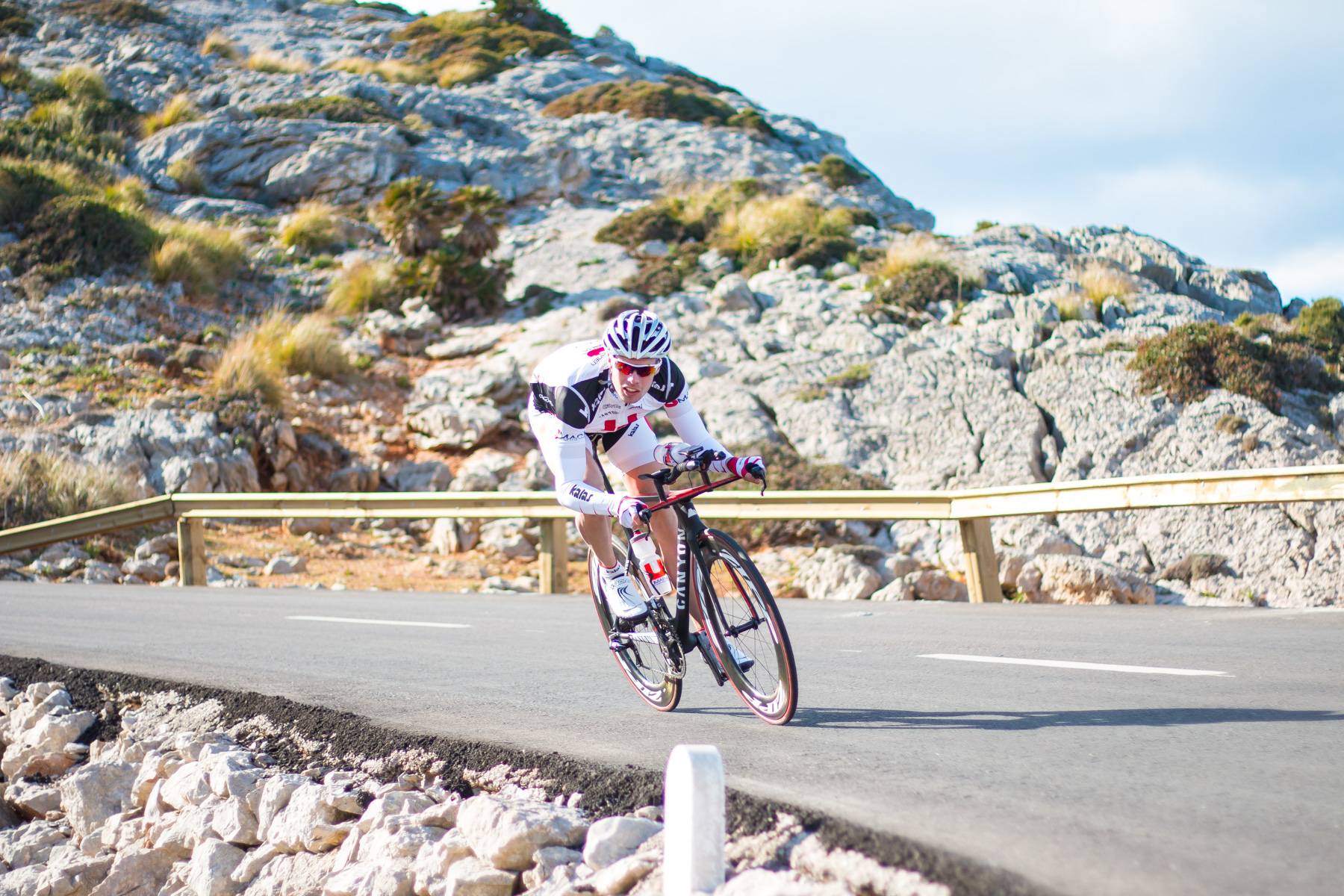 Nice roads and beautiful environment is the main reason why Andreas loves Mallorca.

According to Andreas, cycling in the mountains is among the best things you can do in Mallorca.
-Here you can ride your bike on one of the mountain roads up to 14 km, often without traffic. And in a beautiful environment too, he adds.
If running is on the schedule, the promenade in Palma is the obvious choice.
-I never get tired of running there!, Andreas says and describes how he passes one beautiful scene after the other.
At first he runs along the ocean with the beautiful Cathedral in the background, he passes beach club after beach club and into Portixol/Molinar, he then continues towards Ciutat Jardin, and further along the Platja de Palma and S’Arenal.
-When you get to the area where the airplanes are about to land, it is a completely open landscape. Not a single house to be seen, it is so awesome! 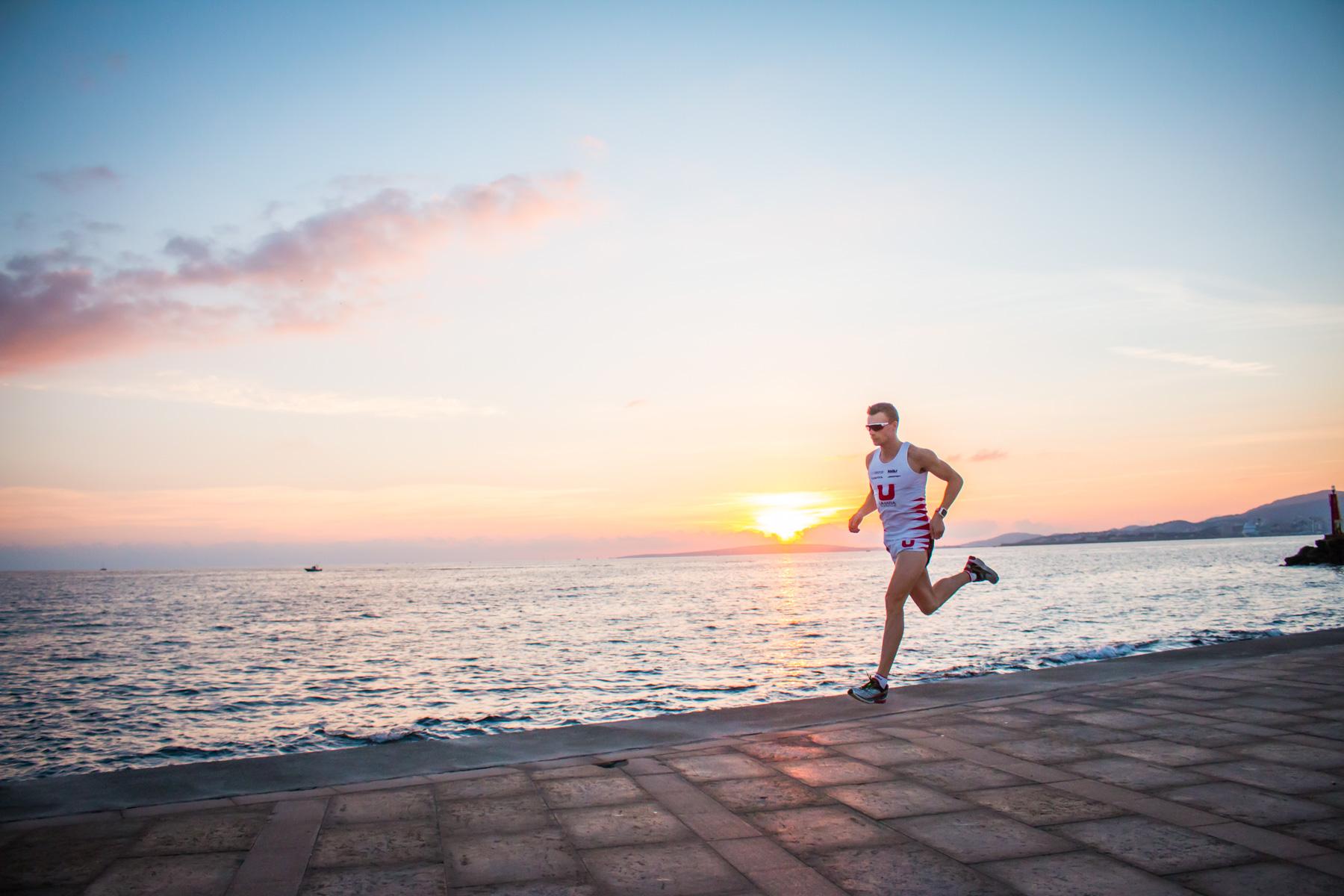 Andreas favorite running route goes along the water in Palma. This photo is taken in Portixol in december 2015.

Sunny and warm all year round

The weather in Mallorca makes it possible for Andreas to train all year round. Spring is like a Swedish summer and during winter the temperature stays around 15-20 degrees, which is ideal from a training point of view.
– I swim in the ocean almost all year round.
But Mallorca and Palma are more than just training for Andreas. The combination of living in a city with so much to offer, combined with the magnificent nature is priceless to him.
-To be able to live in a big city with such a large range of options, but still ten minutes to the sea and ten minutes to the mountains, I do not think you can find that anywhere else.
And he is not the only one who feels that way.
-People who try out cycling here, fall in love immediately, Andreas says and laughs a bit. They want to buy a bike and a house in Mallorca right away! 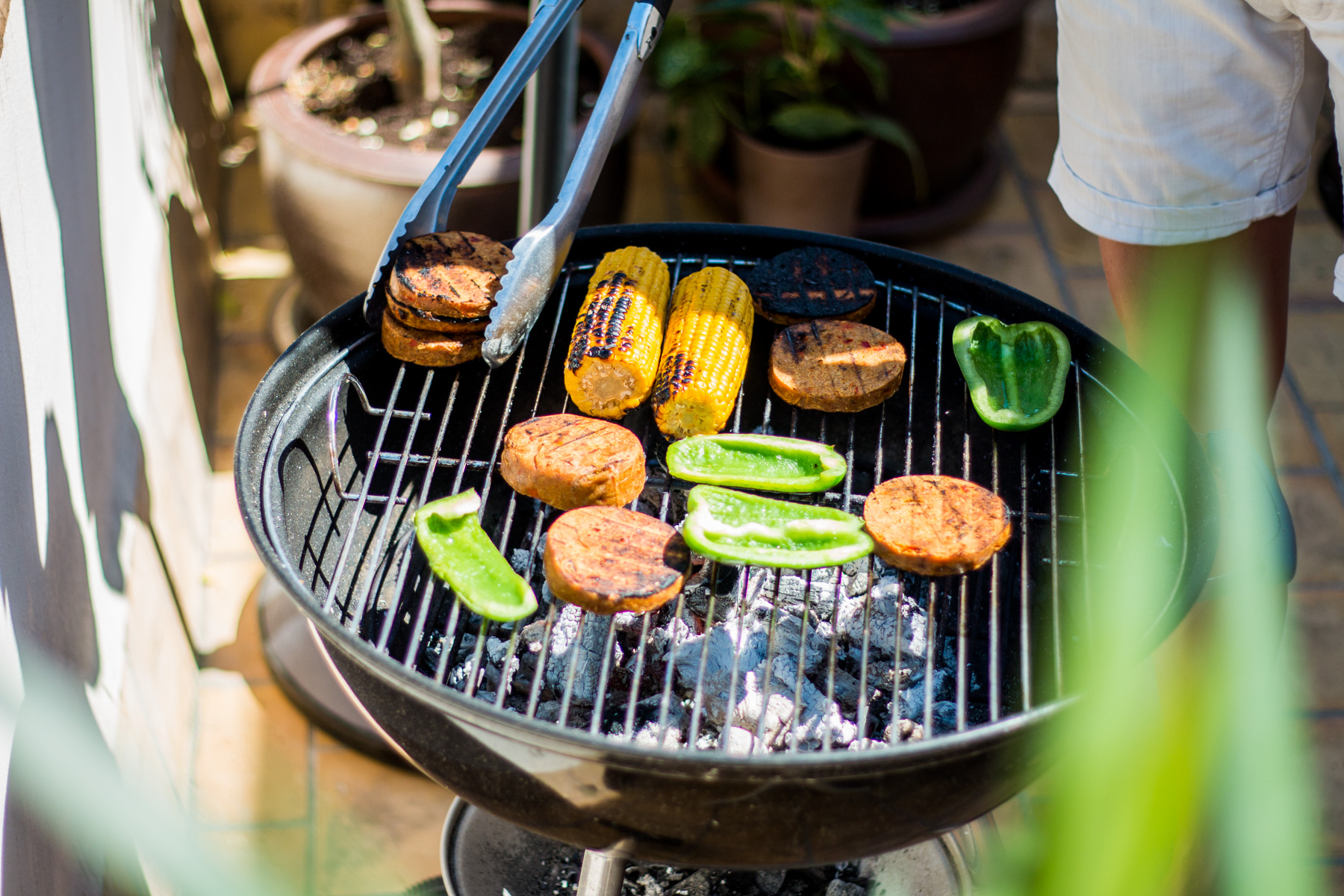 The barbecue from Weber is frequently used, at least once a week. In the spring they use it in the middle of the day but in the summer they have to wait for the sun to set. 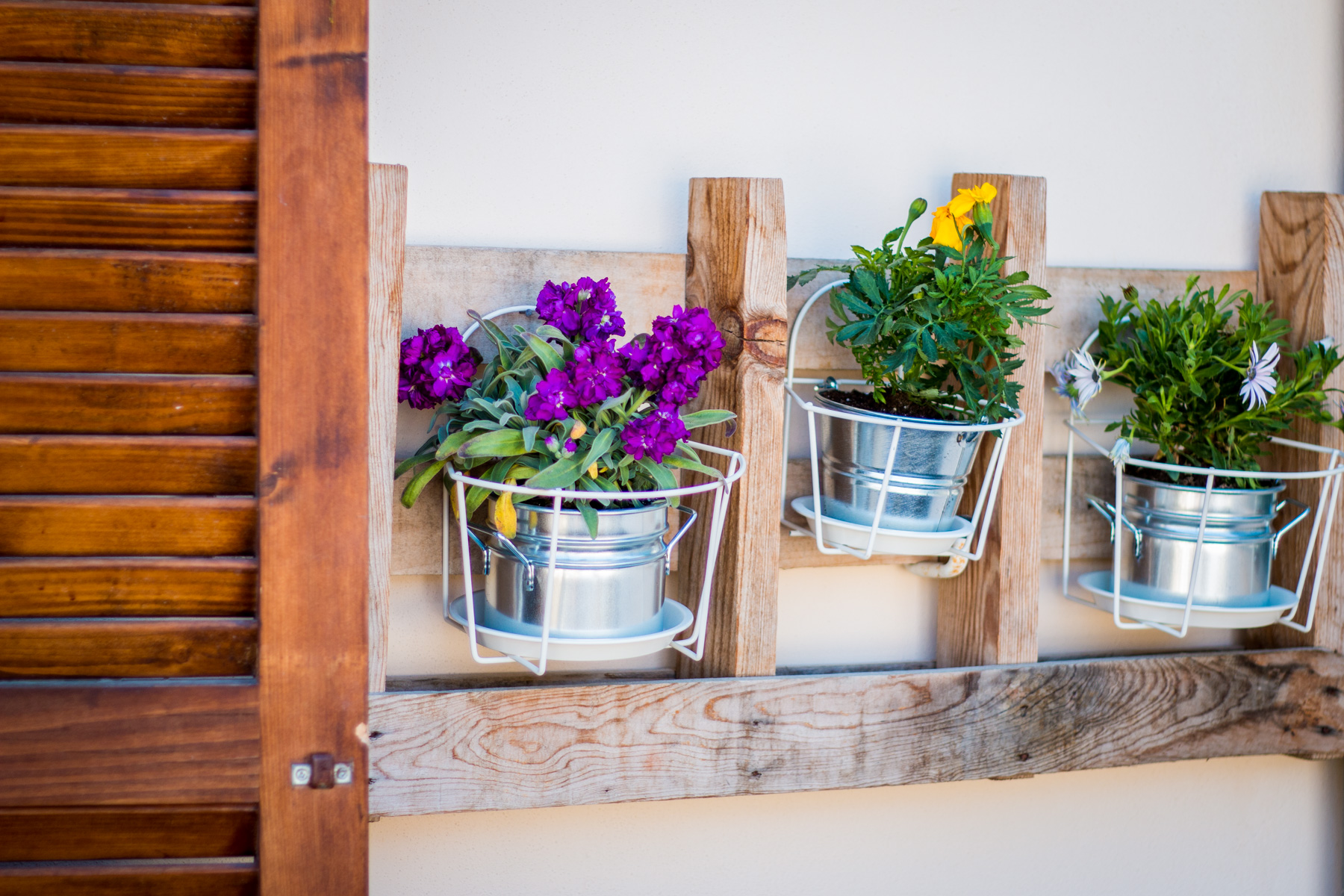 This is a DIY project made from an old pallet. 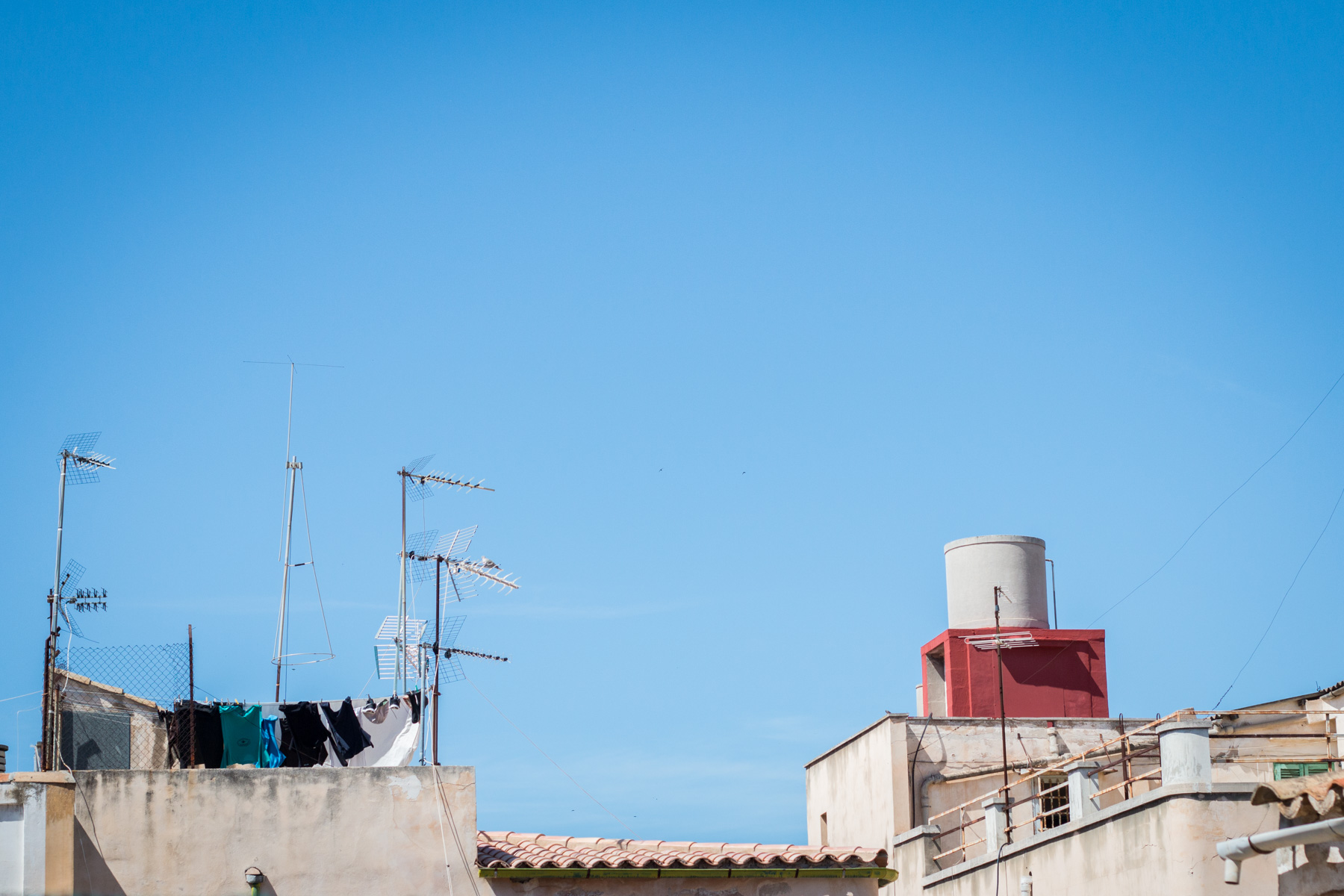 Andreas use his terrace for more than just hanging laundry. 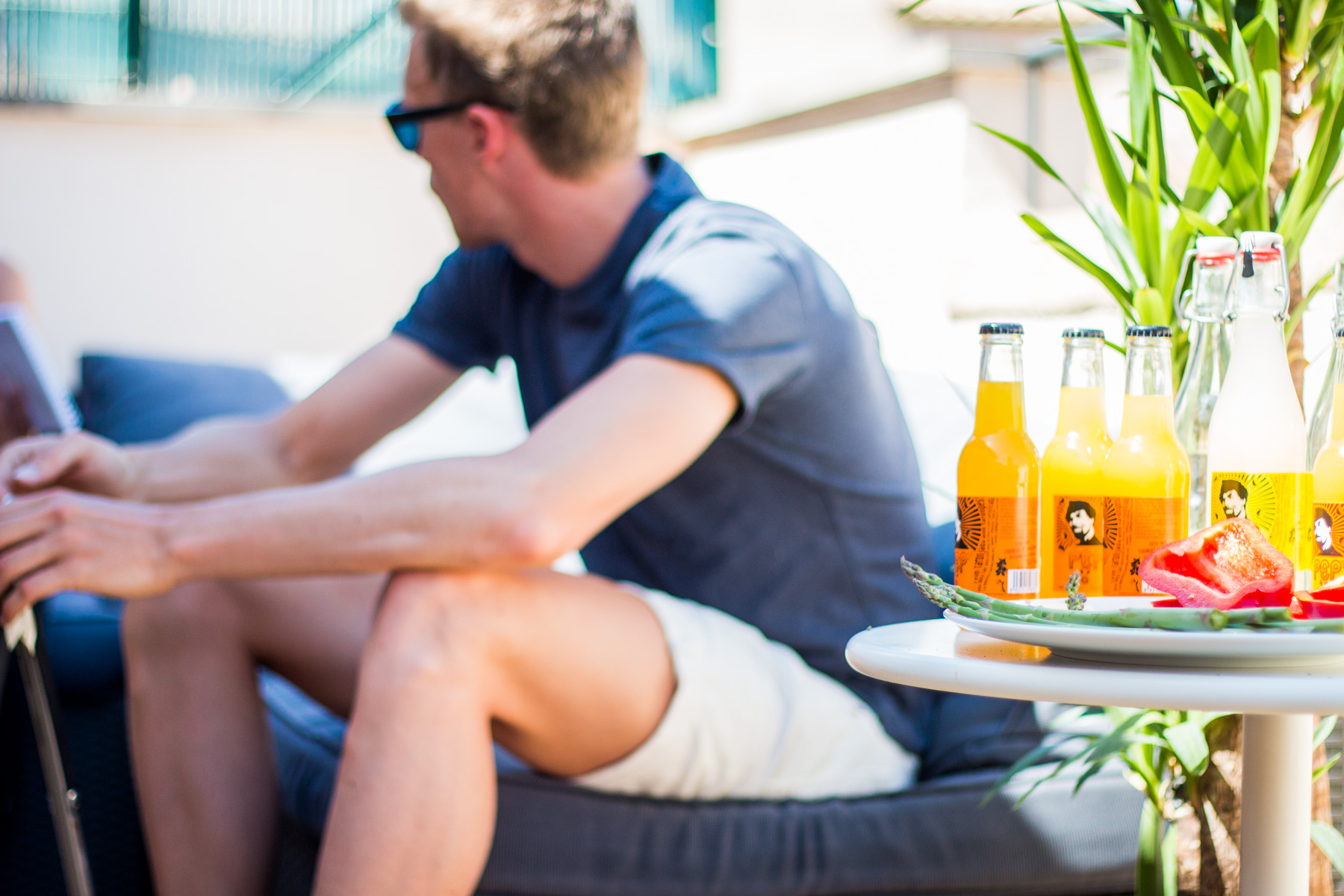 Andreas’s favourite spot where he rests and eats between his training sessions.

Do you also want to rent a property in Palma? Have a look at Rent a Home Mallorca.
Text: Maria Strömqvist
Photo: Ida Carlsson 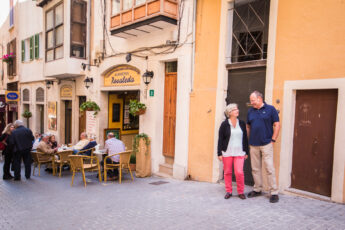 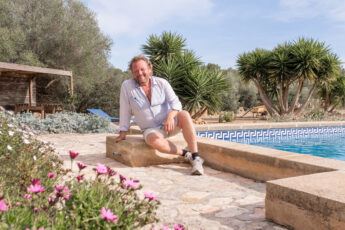